Day 18 – was phenomenal! After a good night’s sleep, we headed to the beach for a sunrise shoot at the suspension bridge on Mazeppa beach. Met by a local tour guide, I did a quick interview before we set out to our start point. The launch was quite rough, with poor Wendy falling into the sea before we even got going. She had tried to jump onto the boat as we were launching. It was a 2-hour boat ride with a slightly bumpy North East wind.

When we got to our start point, the water was still dirty, so we had to head out further to get to cleaner water. We ended up 38km out to sea! There was a fast current and a North East wind, so it looked as if we were in for a fast swim. Today I was excited to get in. We were so close to East London (just 2 swims away) now, and we had good fast conditions to help us along. Although I was amped, I was also tired. I did a starfish jump into the water with a whoop of joy as the water was incredibly blue and warm!

The original plan was to swim 30ish km and stop at Chintsa, but once I started going, we realised we needed to maximise on the conditions we had. I was overly excited, so I started swimming a little faster, moving at 29sec per 100m! It was incredible. To put that into perspective, the world record for the men’s 100m freestyle in a pool at the Olympics is 46.91seconds!

I managed almost 6km in the first half-hour, and by the second 30 minutes, I was sitting just short of 12km. I had thought in my head during that 2nd 30minutes that I should maybe push for a 50km swim but then decided the team would not buy into it. The reason we wanted to stop at Chintsa was so that we could avoid the strong North East wind on the return trip. We did not want to overshoot the mark and make an uncomfortable ride for the team after 3 long days of swimming.

At the hour feed, Sarah suggested that I push for the 50km mark, heading into East London. I took that as a sign, and off we set. I quickly had to recalibrate my brain and pace from doing a fast 35km, to a 4 and a half-hour swim. I could not maintain that pace for that long. I settled into a slower rhythm, my lats and triceps already complaining from my fast first hour. I was still in for the long haul, but I knew tomorrow was a rest day so I could push.

At the 2 hour mark, Sarah jumped in to keep me company and stayed for an hour. I was in the zone, just trying to maintain a comfortable pace. I then had an hour alone riding waves and getting the occasional sting before she jumped in again for the last 7km. I was back in my happy place with my friend reaching a personal goal of a fast 50km swim. Every km that went down, I signalled to her with a huge smile. We had a happy fast swim to the end. I so was stoked!

I am so grateful and extremely happy with 50km in just over four and a half hours. This meant that we had reached Gonubie in East London. Happy days, smiles and massive celebrations all around. Now, we were ahead of schedule, yet when I look back at my planned schedule that I had put together over 1 year ago, we were exactly on target. Against all the odds that said I could not get here, my team and I have given everything we have, and here we are! We are in East London, albeit with no more cash, but so stoked!

Now we reconsolidate to figure out how to get to Mossel Bay. 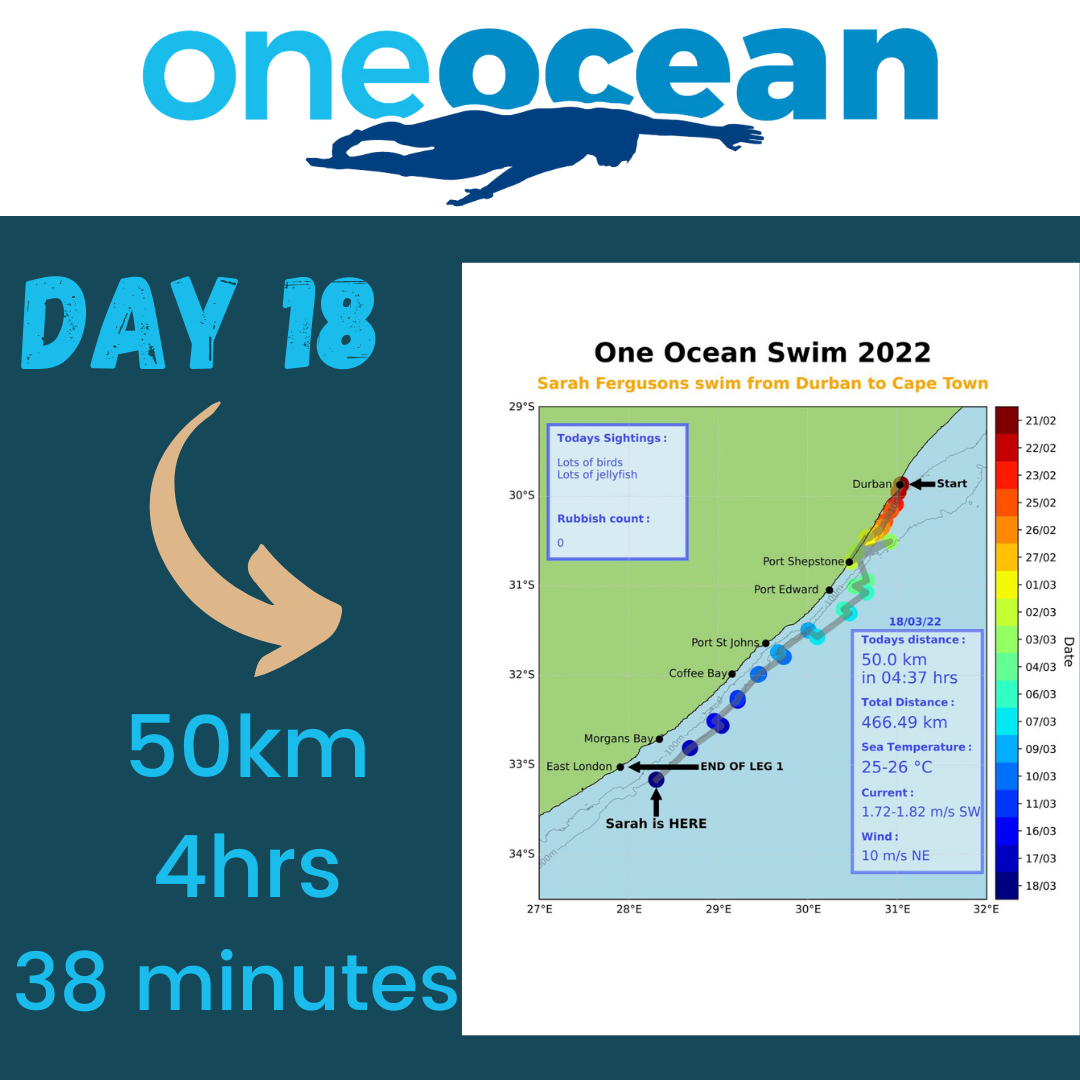