Day 20… We had a 5 am start as we let Chintsa and began our way to East London Harbour. The skippers had left earlier to get fuel, however we arrived before them. During our travels, we got to see a beautiful sunrise. I was feeling sore, and my head was not in a good space. This was potentially the last swim for us as funds have run out.

I am not ready to stop!

My team and I have given everything we have to get this far. To delay it all, and add on an extra month at the end of the year is a big ask for everyone. The team have been amazing, showing me nothing but 100% support regardless of the outcome. It is hard for me to carry it all, but knowing their support makes it a lot easier.

This was my morning message to the group:

Today, we are swimming in the current 40km out to sea, and we hope to get as close to Hamburg as possible. Yesterday was spent at the Chiro trying to sort out my neck and shoulder, and then we went to East London aquarium, which is in a very sad state. That said, they do their best to work with what they have. They also do a lot of rehabilitation for rescued animals. The rest of the day was spent dropping my sister at the airport, resting and prepping for today.

Wayne and Rentia leave us tomorrow. Angelika and Wendy are driving back today to Durban, which leaves us with two skippers, a coach and myself.

We have bad weather coming from Thursday to Saturday, so if money comes in, we will only continue on Sunday. However, for now, this is our last day of swimming (unless we get more funding).

The team and I have given everything we have to get this far. We all want nothing more than to get to Mossel Bay by May. We are doing this for the ocean, not for ourselves.

Thank you for all your support and love to date. We will keep you posted!

We headed out to the harbour only to get stuck behind a massive barge ship, it worked out to be fortuitous because we realised we had forgotten the team’s coffee behind, so we had time to get back to the cars before they left!

By the time we were back, the barge had gone, and we set out to our start point. On route, we came across the start of the sardine run with multiple stable bait balls, diving and turning gannets, as well as many common dolphins putting on a show. It was spectacular, and Cassie was in his element. I, on the other hand, was in business mode. I could not dwell too much on the sights. I needed to prep my mind and body for the task ahead, I was worried about my shoulder.

We set off again, and just over an hour later, we found clean water and a fast current. It was closer than expected, which was great news. We got Wayne in the water, but by the time I was ready, we were 400m past the mark, so we had to get him and the kayak back, and head North before trying again.

The current was fast! I pin dropped into the water and set off. No words, just business. My body did what it does best, and my shoulder was tight and tender, but it was responding. The water temp was 25, which is cooler than we have had, but still nice and warm. I said very little to nothing on every feed and just got the job done.

This was the first swim I have done on this trip where I actually zoned out. As a result, I missed the Albatross flying over my head! Many birds were swooping low as I swam, which was good company. My shoulder, thankfully, started easing as I swam, which was helpful, but the water temperature continually dropped. I was in for 4 hours, and I worked out that I could do 45 – 50km at that time at the pace I was going. At the 3 and a half hour feed, my team stopped me and told me we were done. The water was now 20 degrees, so I did not complain. As I got out, they explained that we had hit some cold currents. There was a wall of water which was 2 different colours, creating a semi barrier and causing me to swim almost 90 degrees back out to sea. Cassie was fascinated by it, yet I was just happy to be done!

We headed back to land in line with Hamburg. Sarah and I passed out on the deck, and when we stopped and woke, we were surprised and delighted to see this bank of dunes greeting us! What a beautiful isolated beach! Franco and Grace (Andy’s daughter and her boyfriend) were waiting to greet us and helped us trailer the boat around a very tricky corner back to the parking lot. We headed to Grace and Franco’s place for a hot shower, pasta, and rest while the boys sorted out the boat.

We were going to leave the boat where it was in the hope to return on Sunday and continuing our journey.

We had a wonderful evening, eating pasta and drinking homemade craft beer by the fire. We then headed back to Chintsa ( which was an hour-long drive). There, we said farewell to Wayne and Rentia as they were returning home. Rentia had to prepare for a race. We had opted to come back to Chintsa as we knew we had 3 bad weather days ahead, and it would save us from packing up everything for Hamburg. Also, it was such a comfortable home to stay and wait. Furthermore, it allowed us to do some school talks. I also had another chiro session on my shoulder.

Angelika and Wendy had already left for Durban that morning, as Angelika had to attend to her husband having a heart op, and Wendy had some business to get back to. The team was down to just the 4 of us!

At home, I had a hot Epson salt bath, and some much-needed sleep.

End location: Just north of Hamburg 35km out to sea 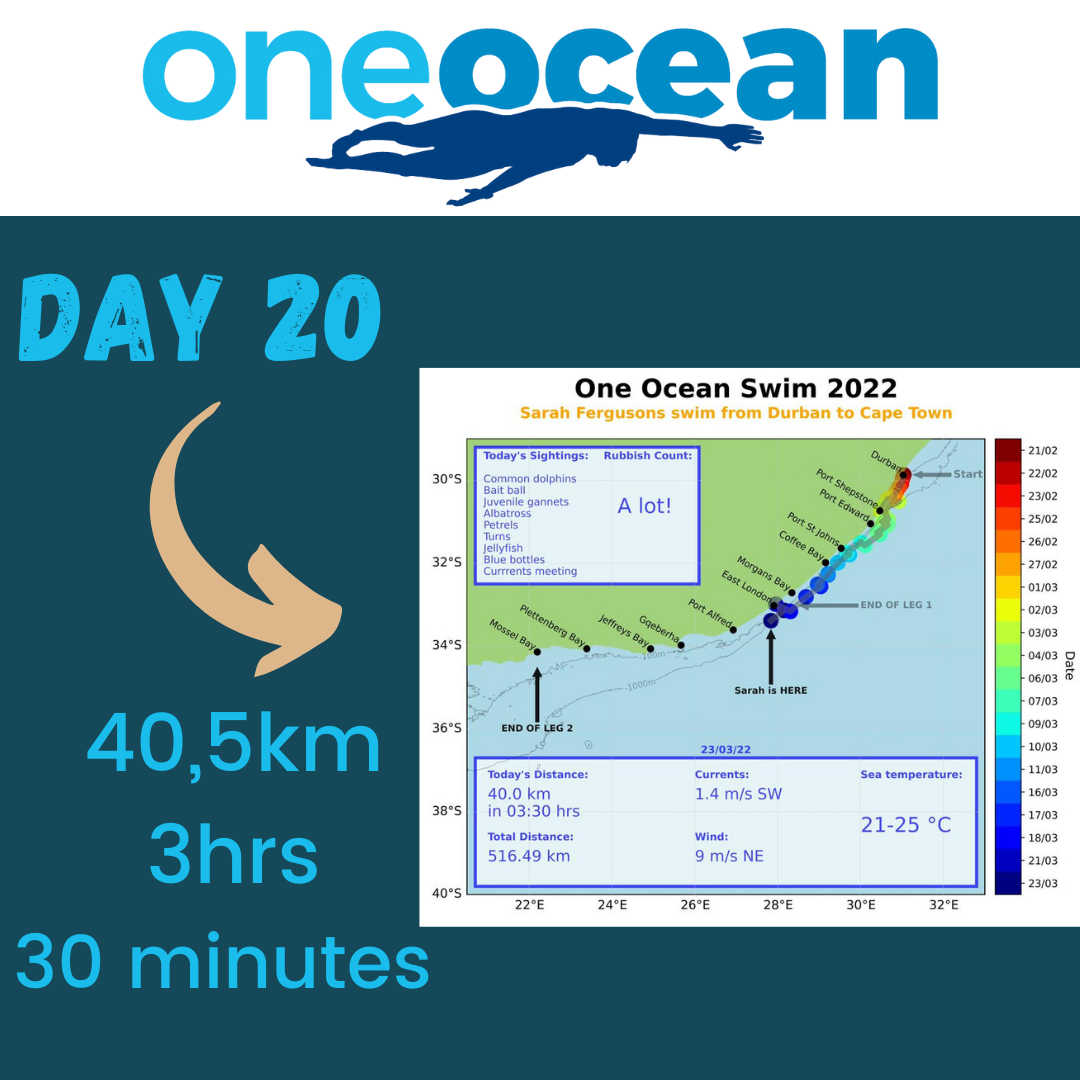