Day 6 was tough. We had our usual departure time at 4:45 am from Durban to get to Cassie’s house in Umkomaas. Wofty, Sarah and her son Heath were in the car. Sarah was driving so I could eat my cereal! We met Andy at Cassie’s spot, lathered up on sun cream and headed to Scottburgh.

It was so great having some friends supporting us at the launch! When we arrived, we were met by OJ, Hazel and her neighbour and Kerryn. In addition, a bunch of nippers came out to send us off too.

The swell was massive, and it was a very tricky launch. Cassie had to wait patiently for the gap, and it took us 20 minutes before we could safely launch and get to the backline. We then checked the shark nets to see if any turtles were trapped and headed South.

At the 8km mark, we checked the current, and it was moving fast in a South-North direction. I suggested that we continue 27km South so I could do a solid 27km swim. I wanted to make it to 100km in the first week. This was our target.

We rechecked the current another 5km down the coast, and it had finally switched to the elusive North-South current that we have been searching for all week. It was such a relief!

I did a quick calculation and then opted to go 15km South of our target to try do 4 hours of swimming. I knew the first 7km would be tricky against the current, and then I would have easy swimming as the current switched to the South-North.

The AMAZING news is that we finally found the Aghullus current! It was close inshore, so on Tuesday, when we resume, we will finally be swimming in the right direction, and I can go back to time-based swimming and not have to gamble on distances. I am really looking forward to this!

As I dived into the sea, the rain was starting to pelt down, and I felt sorry for my crew on board as the boat began to get wet, and they faced a cold wind whipping in their faces. I was happy in the warm ocean and settled into the swim. Yet, the wind was pumping offshore causing waves to break over me. Andy was battling in the double kayak, and I was swimming ahead of him. At the first feed, Wofty jumped into the front of the kayak to assist, yet even with the two of them, they had to work hard to fight the wind and waves to try to keep me on track. I was still out swimming them at times.

There are benefits to being low in the water. The wind does not affect me as much as the kayak and the crew on the boat. However, I did swallow a lot of water and had waves breaking over me and hitting me from the side. It was a wild ride, and I worked hard against it for 90 minutes. Swimming and being in the ocean is my happy place, but the toll was soon to show.

Suddenly, just after 5km and a slow 90 minutes of battling it out against the elements, the wind switched off, and I could finally start to get into some sort of rhythm. Wofty no longer needed to paddle and Andy was back on his own. We hit a lull in current with no assistance or resistance for a few km and then finally, I started gaining speed as the wind died down even more, and I moved quickly through the kilometres.

My arms began to fatigue as I felt the lactic acid build-up from the hard 90 minutes earlier. I plodded on and, eventually, we hit the 15.5km mark, which meant I was done for the day.

Still, there were no significant sightings other than the ever-intriguing jellyfish and, of course, a few stings to make sure I was present. I was exhausted after today and felt like I had been through a tumultuous storm.

On the other hand, I am incredibly happy with our progress given the conditions we have already faced this week. So far, we have managed 88km, located just north of Mtwalume, a few km North of Hibberdene. I hope to reach Port Edward by the end of next week!

However, for now, I am grateful for our rest day tomorrow, although it will not be much of a rest day as we have to spend time sourcing vehicles, organising the satellite phone and packing. We are leaving the comfort of our homes and will be on the road for the next few weeks. Here we go!

Water quality: clean most of the way with about 10m visibility

Weather: stormy windy and rain before the calm. 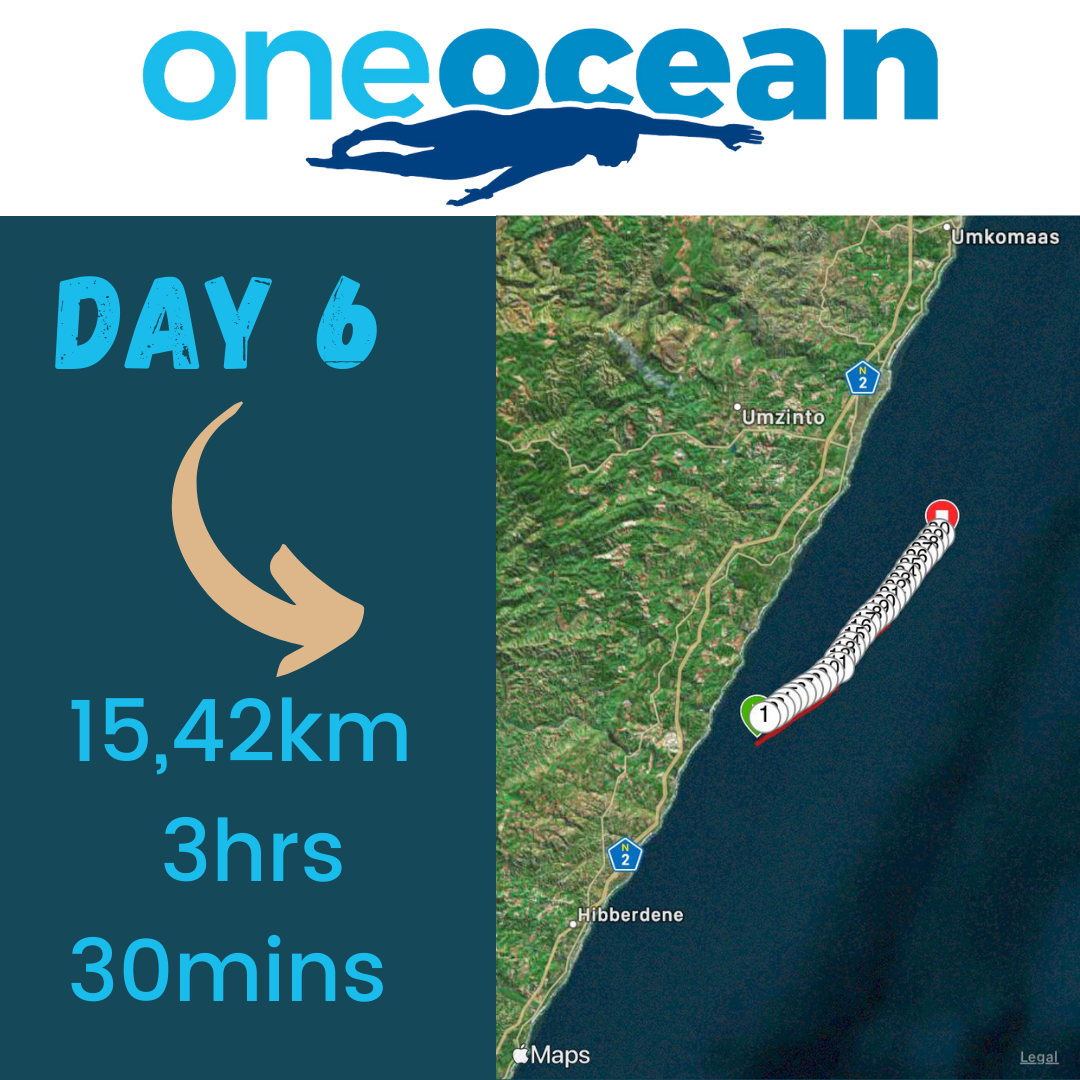