There is another day of swimming. Sadly, I had a very restless sleep due to shoulder pain, overthinking, overheating and just being anxious about the early wake-up. It was the longest short night, and eventually, we work up at 3:15 am and set out to action. First was breakfast, then pack up and off we went to Hamburg Backpackers, where the boat was safely tucked away. We met Andy, Grace (Andy’s daughter) and Frankie (Grace’s boyfriend) at the backpackers. Grace and Frankie have relocated to Hamburg from Joburg, so it was great to see them again. (I had met them previously on the sardine run with Andy in 2018). Grace has closely followed our journey thus far and has given me the nickname ‘Sarahzonian’. Andy, unfortunately, had to go to Morgan’s Bay for a close friend’s memorial (one of his mates from his paratroop days), but Grace and Frankie were all too keen to take on the paddling role.

So, off we set to launch from Hamburg. It was a huge negotiation navigating the narrow path to get the boat and trailer safely onto the beach. Much to the amusement of the local beach clean-up crew, we finally got through.

The launch was relatively easy, and we travelled 25km out to the mark. The drive out was so wet. Sarah and I were lying flat on the deck, covered up but getting absolutely drenched! Frankie was in his element, and Grace seemed pretty chilled. At the mark, the water was much warmer than the air, which was a relief. Grace and Frankie got into the kayak, and I dived into the blueish, warm 25-degree water, and off we set.

The current was pushing, and I was going at 11-12 km/hour. There was a light east wind blowing, but I was happy. We saw many birds, and it seemed the further South we got, the more bird numbers increased. Swooping low and close, we had white chinned petrels, Antarctic skua’s, albatross, senior gannets, turns and juvenile gannets. It was really cool swimming in the company of such birds. I still got a few stings, but it was alright. Eventually, the rain died, and the sun made a brief appearance. Sarah jumped in for about 40 minutes. My shoulder had started hurting but seemed to fix itself after she joined me!

There was one more hour to go, and in the final 30 minutes, Frankie donned his fins and cap and did really well to keep up. It was such fun having a different company. I finished my 4 hours with 42km behind me, and we ended up coming in at Mgwalame. We had overshot the other site by a decent amount.

We were met by some locals on the beach who allowed us to keep our boat on the premises overnight and use the hose to clean the motors. It has been so great to meet locals and hear how people have been following the swim.

We then headed back to Hamburg and were treated to an incredible potjie from Alan and Mandy (the owners). It was such a treat to have food ready to eat. We cleaned and prepped food for tomorrow’s swim and went to bed early.

Start location: Just north of Hamburg 35km out to sea

Water quality:  vis improved over time and the current sped up 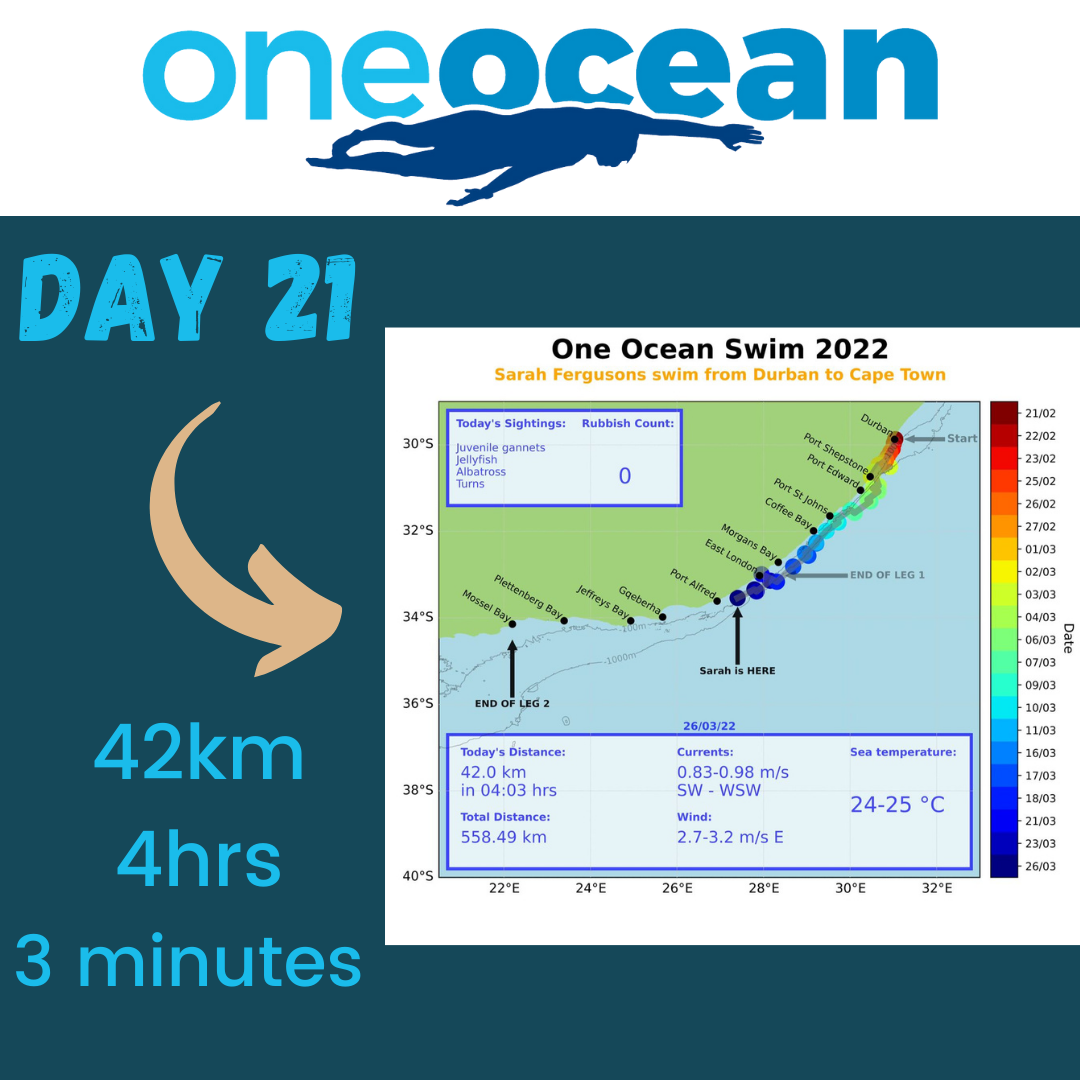