Day 22 is upon us. I slept the best I had for days, and we woke at 5:30 am to eat, pack and head to launch from Mgwalame. We were met by a large group of supporters, including Nandi from Port Alfred High (she heads up the eco-club). I love it when the youth are inspired by what I do as they are the future!

The launch was another relatively easy one, and we headed out to the mark. Yet it was another miserable wet launch, and we were drenched by the time we got to the mark. The water was cooler than the day before, so I was not too amped to get in. However, I realised it was still warmer in the water than out.

I started with an epic flop into the ocean. I did a full-on belly side flop as I slipped getting into the water. It was much-needed entertainment for everyone in pretty miserable conditions.

The water was 23 degrees, so a lot cooler than what I have been familiar with for the past 21 days. I started with a niggly shoulder, with my neck being unaligned too, which gave me a headache. I was feeling a little worse for wear, yet, I managed to get into a good rhythm quickly with a slightly increased stroke rate than usual due to the cooler water (27 strokes per minute compared to 25 strokes per minute.)

Many birds were joining us again today, and at the 3-hour mark, a Skua came and sat on the water right next to me. I stopped to say hi, and it was so cool to be that close!

The water got progressively cooler, with the sun attempting to make an unsuccessful appearance a few times. It rained, and the swell got bigger and bigger with the visibility reducing and the temperature dropping. We were nearing the end of our assisted warm current. I hope to have one or 2 more days in the current, but it is not long before the real slog will begin.

I exited the water just in time before torrential rain hit us. We had an hour’s drive back to shore. Sarah kept me warm as I lay flat on deck with Andy, and thankfully the sun came to say hi, which helped. I shivered for about 45 minutes, eating whatever food I set my eyes on as we travelled home.

We were met by a small yet enthusiastic reception, which included Caroline and her boyfriend Dale, who set us up at Kleinemonde with food and a comfortable home for the night, Alex McPhail (a podcaster and his family) and a few local swimmers.

Caroline also gave me delicious hot chocolate from Shonas café and the yummiest rice wraps, which we all devoured in the car. We came home to a hot Epson salt bath, and I had time to prep for tomorrow’s swim.

My body is stiff, and it will be tough to get in the cooler water tomorrow. Hopefully, the weather will be kinder. 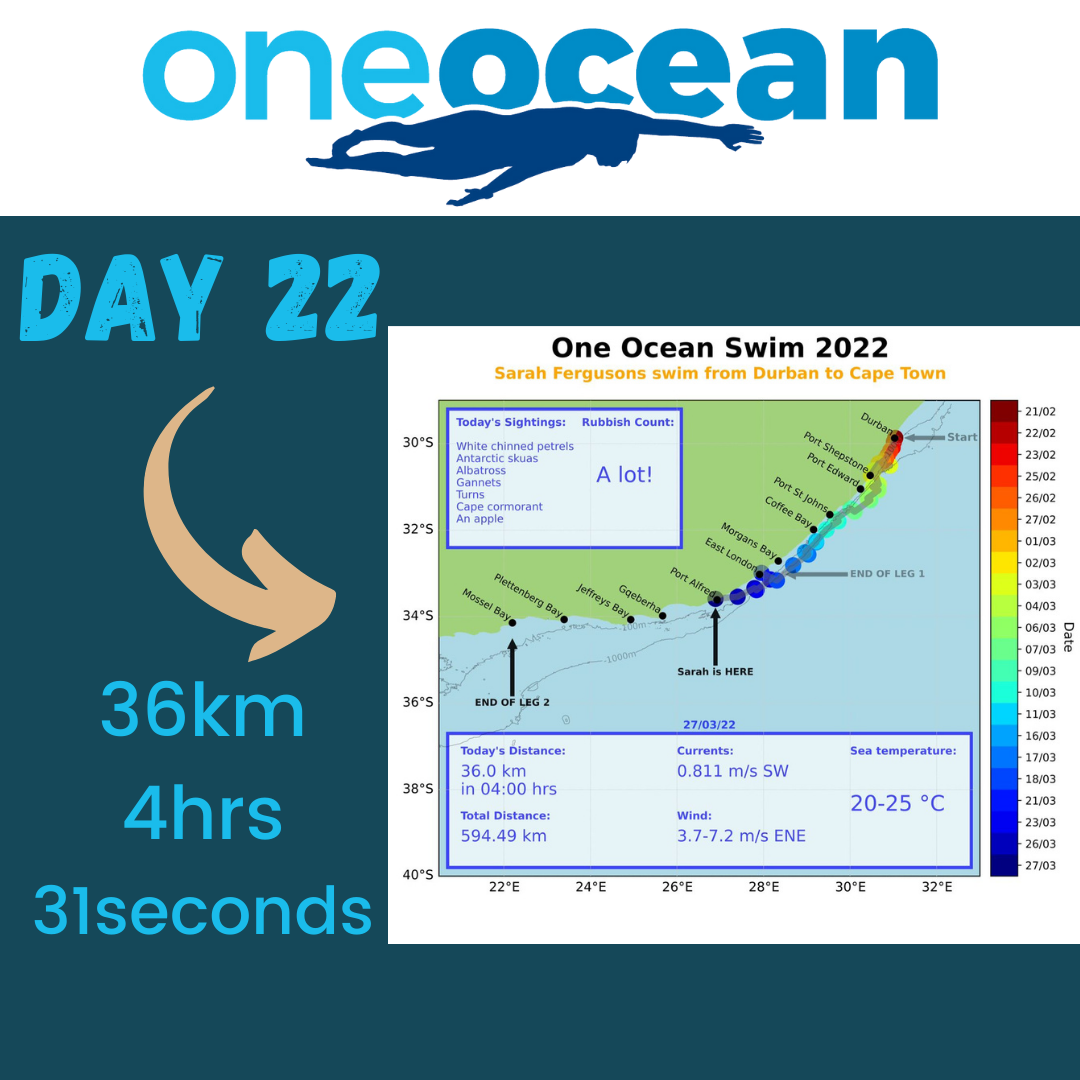