Today was, again, potentially our final day of swimming as we have run out of cash.

This constant scrambling for funding is taking its toll and is all-consuming when we should be free to just focus on what we all do best- swim, paddle, skipper, feed.

We woke up at 4:45 am, ate breakfast, packed and set off to Port Alfred. It was a short 20-minute drive, and then we were met by the local support team, which included our accommodation host, Caroline and Dale. Dale is part of the Dare Devil open water swim team (3x 70+-year-old men who swim daily in the ocean at Port Alfred). Some NSRI crew, Alex Macphail (podcaster) and his family. Alex was joining us out at sea today, which was very cool. I love having guests with us because their excitement and experience helps put into perspective what has quickly become the norm for us as a team.

Travelling 20-40km out to sea to start swimming is not normal, and it takes its toll. It is so great for guests to see what really goes on out at sea and during a swim, including the mental prep I need on the trip out to get myself ready. The trip out was 2 hours of bumpy discomfort, but thankfully the sun was shining brightly.

I was dreading a colder swim and had to get my head ready for what I expected to be a similar swim to yesterday. At our mark, the water was not warm, and we were not yet in the current, so we continued another 10km before finding clean, warm fast water. What an unexpected gift. I knew that from Port Alfred, we would not get much current assistance, so when we found the fast-flowing Aghullus today, I was stoked.

I bomb dropped into the water, and Alex joined me for the first half-hour with Andy’s fins. He did well to keep going, and it was great having new company. For the first 30 minutes, we managed 5km, and then the pace picked up. I was averaging just over 5.5km an hour. I was not yet comfortable in the water, experiencing a little chafe and discomfort in my arm. Yet, at the 2 and a half hour mark, my body kicked in, and I felt really comfortable. I realised that I could probably push for a 5-hour swim today, getting me over 50km in a day. I also needed to maximise the current and the possible final day of swimming, so I pushed on.

Sarah joined me for an hour at 2 and a half hours, and then Cassie expressed concern about fuel and how far we were from land and the need to get home safely. We had 100km to get to Gqeberha and another 55km against the East wind to get to our original launch stop at Kenton.

After Sarah and Cassie did some higher grad maths, I was given the freedom to continue swimming as long as I liked. By then my heart rate had elevated, and I was tightening up. I pushed for 55km and called it a day. The water was the perfect temperature for a long swim with the sun shining. It stayed at 24.7 degrees the entire day. It was lovely and blue and clear. The jellyfish were mesmerizing as always, and at one point, I spotted a tiny yellow fish next to the jelly.

I did get stung mildly, but it was a good solid swim. We had a 2-hour ride back to shore, which went on forever! On route, we stumbled across a FAD (Fish Aggravating Device). It was loose, so the team decided to cut off the buoys, put them in the boat and let the rest sink to the bottom of the ocean, which would cause less damage than floating and leaving the possibility of some marine animal entangling itself.

We also saw some crabs and a shoe, all home to a mini-ecosystem. The birds were present again, zooming in and out while I swam.

We arrived in Kenton just after 4 pm, closely avoiding a flat rock as we came into the river, and were greeted by the local Kenton crowd. It was and always is so lovely having locals meet us. The poor crew had diminished in size as they had been expecting us since 1 pm.

We were treated to Pizza at the local restaurant overlooking the river. Another treat that allowed us to get home and sleep without worrying about food. 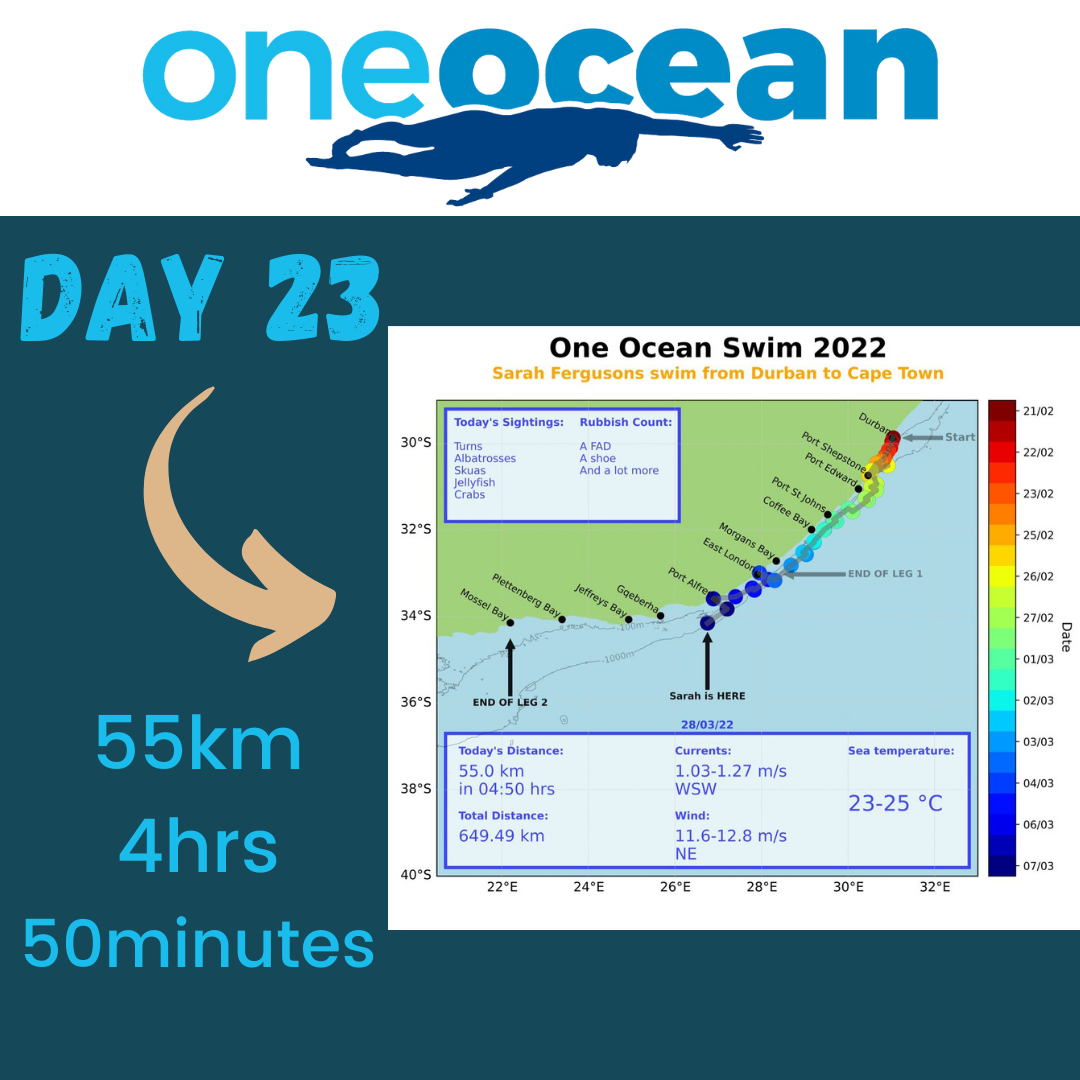