Day 24 – but day 6 of being out of the water! At the start of this day, we were all more than ready to get back into action.

We have been in PE since Friday, staying with our incredible hosts, The Withuhns. Kim, Denzil and Josh have been phenomenal in accommodating us. Josh even moved out of his bedroom so we could stay. They have a guest house, which we were supposed to stay in however, due to Iron Man and SA National Swim Champs, they were fully booked. They offered us their home instead.

Denzil is a physio and works in Orthopaedics, Kim works for Old Mutual, and Josh is in matric at Grey High. Their daughter is at boarding school, Collegiate Girls High. They have all been so incredible, feeding us and making us feel welcome in their home. Today Josh and Kim joined us at sea for an adventure.

We set off from PE harbour and met Jake at Raggy Charters to escort us out. PE harbour seems to have an incredible amount of paperwork. Bird Island is 60 km from the harbour and is a marine protected area. Raggy Charters have been working with Ronelle from Algoa Bay Conservation Trust and Oceans Alive to terminate the Ship-to-Ship Fuel Transfers.

You can read more about that here: Raggy Charters – Marine-Eco Cruises

Ronelle met me at the harbour for a quick interview before we set out. We had to wait a few minutes for another ship to come in before we set off. We rode about an hour looking for clean water and were expecting a South-North current which would mean we would swim with the current and the wind, trying to make up the gap from the previous swim. When we got out to sea, the current was going North-South (I was secretly relieved, as I was not in the right headspace to ‘swim backwards’). We would then come and fill that gap at a later stage.

Eventually, we found clean enough water, and after a brief visit from a curious seal, I dived in after much procrastination to a shock. The water was 8 degrees colder than my last swim. It momentarily took my breath away. I am aware that 18 degrees is a mere bath for most open water swimmers, but I have been spoilt in Durban and the warm Agulhas, so my body was quite surprised! Thankfully the sun was shining brightly in the sky, so there was some warmth. It took me an hour to get more comfortable in the cooler water, but it was still a tough swim. I was swimming against the South West bump, and Andy paddled hard and nonstop to keep up. It was challenging for both of us. At one point, the wave pushed me onto my back into an Eskimo roll! After 2 and a half hours, my body started to stiffen up and it became even tougher. I managed to push on for another 50 minutes before calling it a day. I have a long way to go still. I know it is going to get harder to swim in the increasingly colder water. My body is run down after 650 km and the stress that has gone with it, but I have a few more weeks to push before we can have a break to prepare for the really cold water.

We have already adjusted our feeds to have warm water and hot drinks. As well as a hot water shower at the end of the swim, followed by immediately getting into warm, dry clothes. The shivering is my worst, and most open water swimmers will know all about that uncontrollable shiver after prolonged exposure to cooler water.

My feeds are way quicker. I kick more and expend way more energy to swim much shorter distances. It is going to be interesting to see how I adapt.

It is also getting tougher mentally and physically. I was treated to a brief greeting by a lone seal. 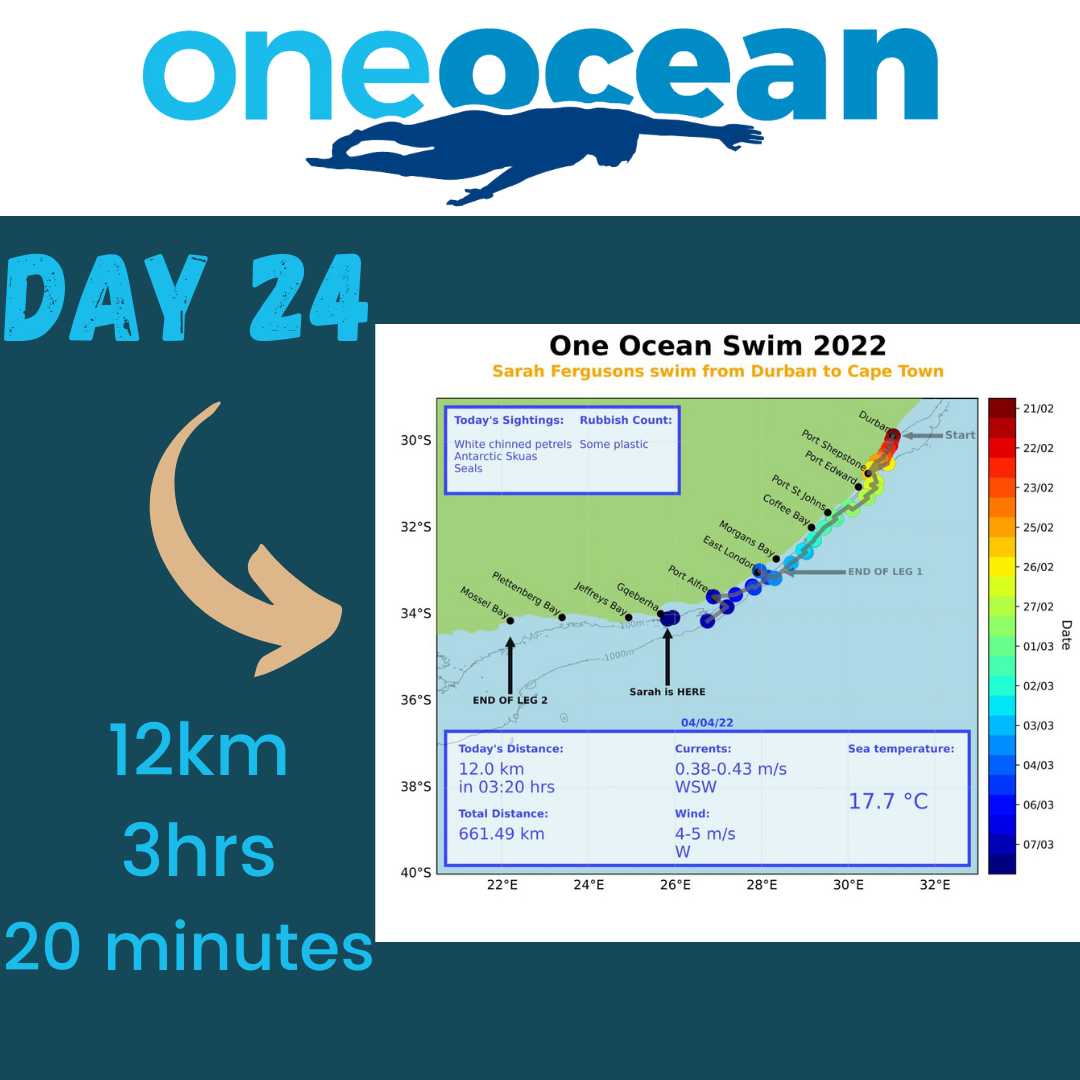