Day 8 began with another 4 am start after a restless sleep. My brain was busy processing the previous day’s events and our serious lack of funding. We got busy with our morning routine of breakfast and packing the car. We then set off to meet Cassie and Frikkie at the Pennington launch site. When we arrived, the sea was looking alright. However, with the heavy prediction of a North-East wind, it would not be safe to go 30km out to sea as we planned. If we were to try to find the current there, we would be at risk of the boat flipping.

We had a long discussion of possible alternative options, and in the end, John and Sarah did a swim out to the backline to do the current check that way. There was still a light South-North current. We debated more about what to do and then decided not to launch the boat today.

We discussed the possibility of doing a swim out towards Umzumbe from the house where we are staying. From there, we could swim south, but this would depend on what the current would do. It has been a rough couple of days, however, we continue forward and work with the conditions we have.

Here is Sarah Houston’s summary of the morning:

‘Okay, so commitment 150 per cent. John was pushing for us to bank some kms today because yesterday was just dismal! We weren’t sure of the current, and with a predicted strong NE, we were loath to put the boat to sea and have a repeat of yesterday. So, after much discussion, John and I swam out to check the Pennington site and its current, which was inconclusive. We then decided to launch the kayak, with Sarah swimming from Umzumbe. They managed to get a break successfully and began doing an inshore swim off the backline, heading South to see how far we could get.

We are keeping them safe by maintaining a line of sight between the points by vehicle. I was walking along the beach watching them, and the car is driving to the next possible point for pick up should they need it. The best-case scenario is we swim to Umtentwini, which is just before Port Shepstone. That will hopefully bring us closer to the point where the Agulhas current runs closer to the coast. This is a cheaper way of us banking some kms. The water is clean enough, which is most important since visibility is always one of our primary safety concerns. Will let you know how far we get!’

We spent the next hour driving and looking for possible exit points if I were to swim from Umzumbe South. I was getting increasingly frustrated at the amount of time spent looking at all the options. If I was going to swim, I needed to get into the sea already. Swimming in the heat of the day takes its toll.

John and I exchanged a few heated words. It was quite a tense atmosphere. My frustration was simply pent-up frustration over the last few weeks and the promised sponsorship falling through, with the financial pressure mounting up. I am also feeling the pressure to try and get some swim mileage under me.

I fully understood the importance of safety and looking for exit points, and I value John in his thoroughness and priority of safety first. I apologised soon after my grumpy outburst, and the air was clear again. It is tough making these decisions day in and day out when we have massive financial constraints. Moreover, everyone has given up so much for this to happen. I just want to swim and have my team do what they do so well so that in our downtime, we can fully relax and have a bit of fun rather than trying to brainstorm how to maximise our days within the current fund limitations.

We then headed to Umzumbes Shark Bay to assess the viability of swimming out with a kayak. I was not willing to swim without one, as safety is essential on this trip. I also do not know the ocean down here. I must eat every 30 minutes during a swim, regardless of the distance. I need to keep fuel up and not run at a deficit as I still have a long way to go.

The tricky part would be getting the kayak out to the backline. It is not like a surf ski that can easily punch through the waves. We finally decided to wait and see if John could get to the backline. If he succeeded, then I would follow. The bay was small and surrounded by rocks with a strong East wind and swell making it tricky to get out. John managed like a boss. It was my turn.

I did my 10 push-ups and set off. It took a while to get out, but after one large set, I was at the backline with John. It was very cool swimming over the reef and seeing some fishies!

I started swimming and immediately felt the South-North current against me. I pushed through and waited to get around the point before deciding if we were making headway. John was convinced that I was making progress, so we continued. I spotted an eagle ray, which was very exciting, and a few more jellies. We made steady but slow progress, and I managed to get into some semblance of a rhythm.

It was great swimming off the backline and seeing so many reef fish and reefs. John spotted some dolphins 100m out to sea and a blacktip shark at some point just after we spotted a green turtle.

I was making decent progress, so I opted to break the 100km mark before we headed in. At the 100km mark, we were only one mile out from Umtuntweni, so we pushed on for the last mile. I was so grateful to land onshore and have completed my first official swim of this trip!

We came home to a prepared lunch of butternut soup, a comprehensive salad and some chicken before a recovery Epson salt bath and nap. What a day!

Stings: many and a blue bottle sting 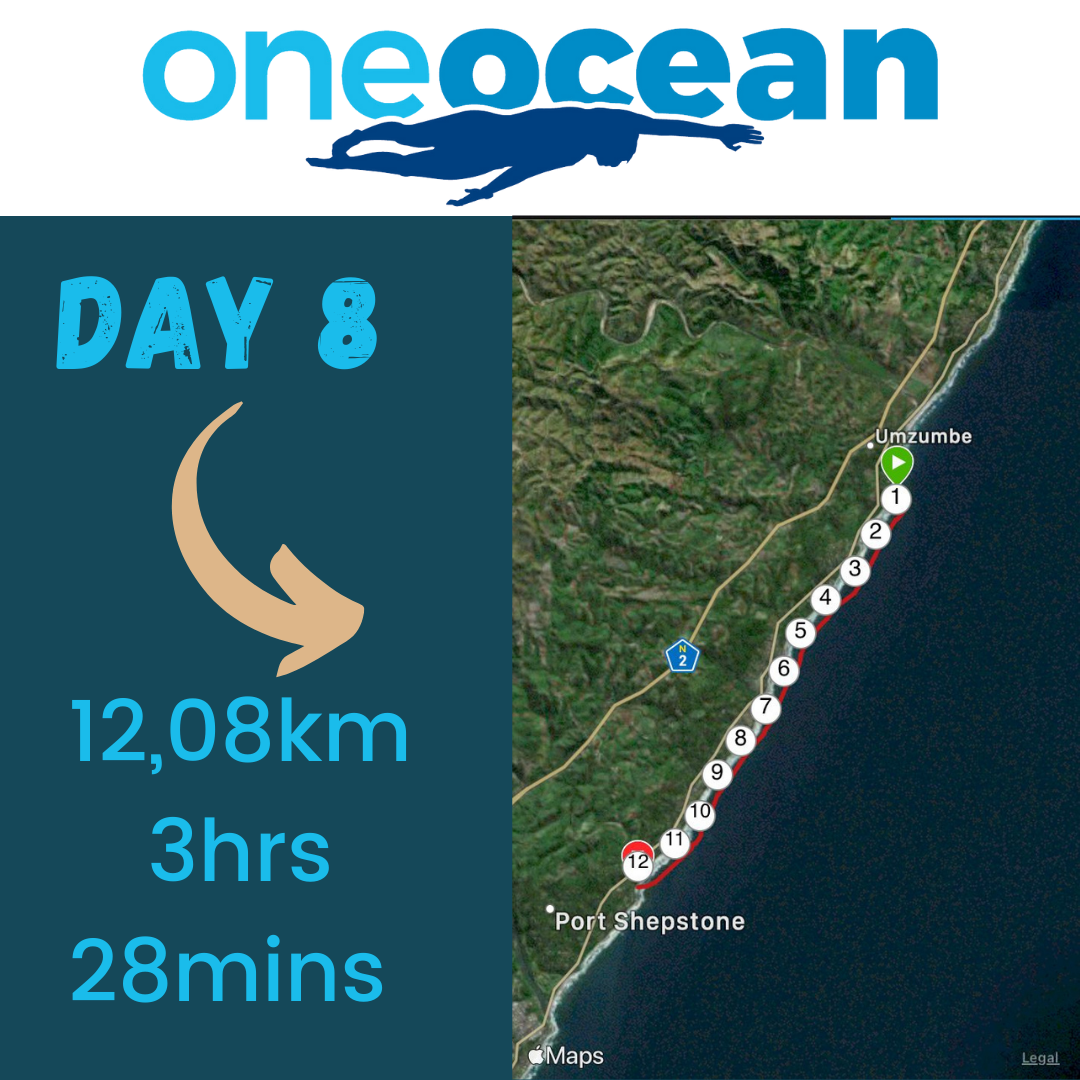