Thankfully, Day 9 started slightly later than usual. Despite the possibility of an extra hour’s sleep, I woke up promptly at 4 am.

At 5:30 am, we set off to meet the boat crew at the Pennington launch site. Today on the boat, we were joined by Sarah’s cousin, Wendy. She is a local in the area and was Sarah’s 2IC yesterday while they followed John and me in the car during our coastal swim. We were also met by someone from the ski boat club who has followed our journey thus far. The launch was good, so we were off.

When we got to the backline, which was our starting point, we spotted a giant manta which was such a great start for what was to be a long day at the office!

The vis was not great, although the current was a light North-South. We thought this was good news…

The sea was clean, and we stopped every 2.5km to check vis and the current, which was then a South-North. We trundled along while the swell got progressively bigger the further out to sea we got. I did not want to swim North again, and with the East wind, it would have been tough for John and Andy to battle on the water. So, we pushed further and further. The swell was so big it washed over us a few times, once knocking Wendy off her seat and onto the floor of the boat. We were all wet and slightly jolted.

By this time, I was looking forward to getting in the water. On route, we spotted quite a bit of plastic, some turns diving for fish, baby flying fish and a baby turtle swimming north. Eventually, at the 27km mark, we found a very light North-South current. Cassie said it was just a puff, but I was taking that! I was waiting no more and dived in.

My progress was decent, and because we were so far out to sea, we were FINALLY on the edge of the Agulhas current. It was crazy! It had taken us 3 hours to get there!

We had the swell behind us now, which gave us a small push, although it had dropped a bit. I swam into a few bits of plastic, which I then collected. John has also seen loads of it. As I dived in, a white chinned Petral took a keen interest in me and swooped so close I thought he wanted to peck me! He hung around for a good 10 minutes before flying away! I really enjoyed the wildlife sightings! Not much else was seen for the next 3 hours. Sarah jumped in to give me company, and John had swapped with Andy and came to swim with me too.

I had heard them before I saw them, but soon we were surrounded by a pod of dolphins which was incredible! They dived under over and around us with their babies for a good 20 minutes. It was magnificent! Sarah, John and Andy also had the privilege of spotting 2 pilot whales a little away from us. Unfortunately, no one got footage of them.

That was the boost I needed to help me continue. I was mentally fatigued, and I was starting to tire of being out at sea. It had already been a long day. We were in the heat of the day. I was tired of swimming. Sarah tried to motivate me, but I was mentally exhausted. I still had 8km to go to reach our mark to close the gap, which would be another 2 hours of swimming. I slapped the water in frustration and did some dive downs and a bit of backstroke to pass the time. I was over it.

My brain had worked so hard the last few days, adapting and recalculating and recalibrating, that it was all catching up to me. Physically, I felt okay though.

Shortly after my dip, we stumbled upon a crab in the idle of the ocean! It was a strange sight to behold but an exciting one! Then the blueys came, and I got a few painful stings, despite John’s excellent job of keeping me mostly clear of them. Sarah got out to make his job easier. Looking after 2 swimmers in the water amidst dodging blue bottles is difficult.

We continued, and my mind was in a better place. I sang songs to pass the time, and the blueys kept me alert too. We stumbled upon a dead octopus which was sad, and then it was just 2km to go. They were difficult, however, I finished with a cooldown of an individual medley and some double arm backstroke. 21km down in 4hours 40min. What a long day!

We still had a 45 min boat trip home. Luckily the swell helped us journey along. On route, we passed a massive ship, and once we got to the launch at Hibberdene, I was met with an ice-cold coke and hug from Angelika!

Afterwards, I went home to unpack, shower, eat and blog, followed by a massage before an early night for one more swim tomorrow before rest day. 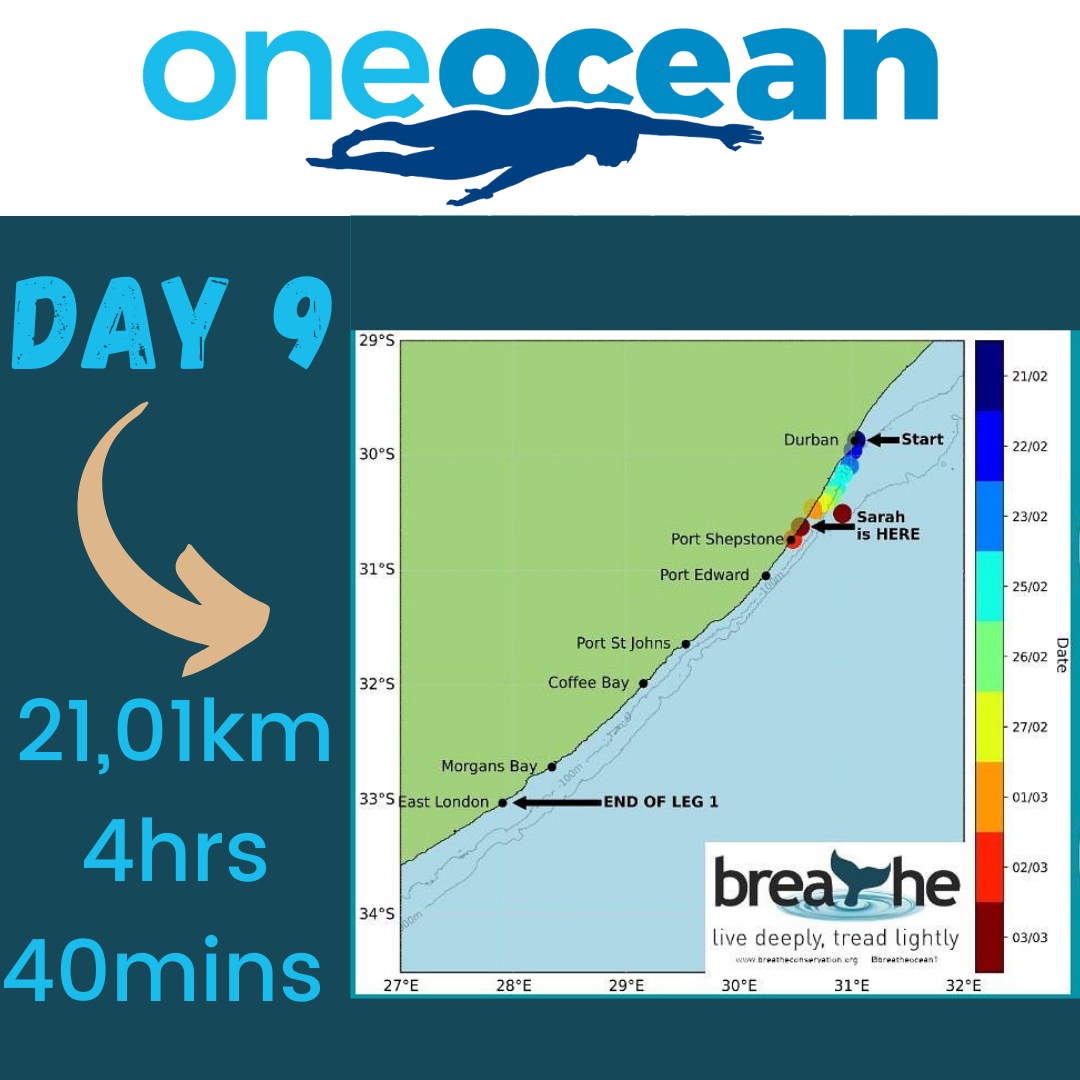