Day 10 was a great day out! When I woke up at 4 am (again), I felt pretty tired and stiff. We headed to Port Shepstone to a beautiful lodge on the river mouth called Umzumkulu River Lodge, owned by Brian Lange. He was very kind in letting us use his launch site.

We had one shot of getting under the bridge through the mouth and into the open ocean. Cassie was a champion and made it look easy, but as with all launches, it could have gone very wrong! We headed straight to our starting line on GPS- Spot backpackers in Umtentweni. We did a current and vis check and then headed out to sea. The visibility was not great, so we headed 10km out before finding half decent visibility. The current was a light North-South! Finally. Cassie had noted that the current was about 30km out to sea. So, off we set. Luckily the wind was a light South-East, so the trip out was much better than yesterday.

It took just over an hour, and on the route, we came across 2 crabs on a floating sponge, an albatross, White-chinned petrels, and sadly loads of plastic. We also crossed paths with a Maersk ship travelling North which was exciting!

We got to the 33km mark, and the current was going North-South, and it was fast! I dived in and immediately began swimming at 7 and a half minutes per km. The water was cooler than it had been. I think the strong North East had caused some upwelling, bringing in the cooler water.

I was in a better headspace today despite telling Sarah that I think I may only make 3 hours, as my heart rate had been a little elevated yesterday. We had ideal conditions with no sun. It was overcast and warm enough to be comfortable in the water. The light South-East gave me a gentle push, and I found a decent rhythm fairly soon. There was nothing to see today other than my ever mesmerizing jellyfish. They continue to entertain me, although, today I did not need to count them to pass the time.

John swapped paddling duty with Andy after 2 hours, jumped in for a swim for an hour and then paddled for the last 40 minutes. I felt comfortable, and my heart rate was stable, so I pushed for a 30km swim. It was an amazing day out. Furthermore, we are just one swim away from the Transkei! Tomorrow will be a well-earned rest day. Some of the team have gone home to their family for a rewarding day.

Water quality: full of plankton got cleaner and warmer 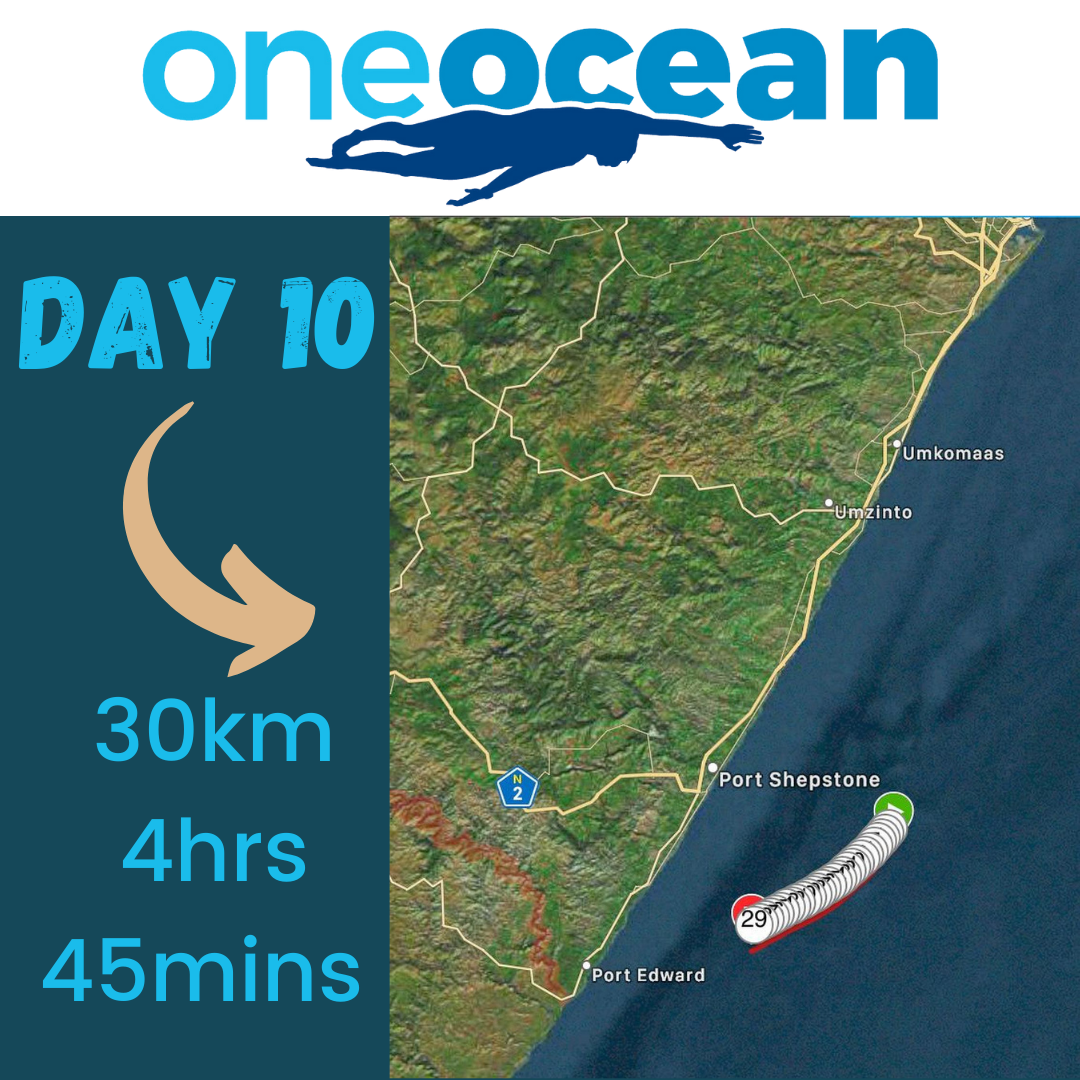