It’s Day 26. After a restless night’s sleep due to crazy winds, we woke at 5 am, wondering what today would hold. Heavy winds were predicted from 11 am onwards, and tomorrow was a right-off due to the continued wind.

We wanted to get out early to catch our gap and travel South of our finish from the last point. We wanted to swim North using the West wind to our advantage. We met Jake from Raggie Charters at the harbour. We then set off at about 6:30 am.

We had a clear launch without having to wait for any boats today. Today we had Kim (our host) join us again! It is such fun seeing how much she loves it out there no matter what the conditions are like. The ride out was fairly smooth, and while we were still in the bay, we saw a pod of spinner dolphins and a whale spouting on our route.

When we got to the lighthouse, we did a current check and saw it was a pretty strong North-South current with a light (but building) South West wind. Our experience to date is that current beats wind, so we were in a pickle. The visibility was poor, and we bumped into a local fisherman who seemed to think there was better current and vis a bit further out, around 5m out to sea. We decided to travel to the 60m depth mark, which was another 2km out, and from there assess the situation. The current was still North-South, and the wind and swell were picking up fast. These conditions are my best, so I was amped. We had a crazy rolling swell. It was wild.

We decided to try swimming South as that is always ideal. Usually, there is no cut-off, and we don’t have to gamble with swimming short of the mark and then have a gap to fill. The idea was to see how far I went and then try to swim North and make another call.

I dived in with a squeal of excitement and was pleasantly surprised that I was not breathless even though the water temp was 18 degrees. My body is quickly adapting. I started swimming South, and it took me 6 minutes to swim the first 200m. Pretty slow going. I decided to turn around and try swimming North. I managed 200m in 2 and a half minutes, which is a much better pace. So, we then had a decision to make. Would I continue slowly South, forcing Andy and Sarah to battle against the wind? Or would I hop back in the boat and travel South to swim North?

After some deliberating, we opted to jump back in the boat and travel South to swim North. The next decision was how far South would we travel against a crazy wind and swell. I also had to do some quick calculations of how fast I may swim and how much time to spend in the water, knowing that the wind was only going to get stronger. We had a 3-hour maximum time limit.

I told Cassie to aim for 6-8km, playing it safe. Yet as we progressed against the wind, it was unpleasant for all of us on board. It is like going on a dirt road with potholes and bumps, wind in your face and cold water spraying over you. I was shivering, trying to keep warm in my wet costume, and mentally getting weaker and weaker. I knew once I was in the water I would be happy again, but how much longer could we endure the ride? How fast would I really travel in the water with the wind, and how long could I last in 18-degree water when I was starting a shivering wreck.

All these things were playing on my mind. Yet, we had to try and make it count as we had already been out for over an hour just trying to make decisions!

I eventually told Cassie to stop at 5km. My body and mind could not cop anymore! We stopped, and Andy jumped in the kayak, and I dived in for round 2. I set off at a cracking pace (29 strokes per minute compared to my usual 25 strokes per minute). I was sprinting and loving it but also trying to warm up. The swell was pushing nicely from behind.

It was a fast hour swim to get the 5km in. I could have managed 10 – 15km in hindsight, but that is always the gamble when trying to swim South of the mark. It is so hard, and I always err on the conservative side because I am doing this swim day in and out. I cannot afford to run at a deficit.

We have now covered 677.45km and are 5km closer to Cape Town than yesterday.

On our return route, we spotted another pod of dolphins with many babies, and it was thankfully a much smoother ride. Poor Sarah had a cracker headache, a start of a migraine, so she was a champion to manage throughout that swim. We came home, got warm, and I treated her neck and shoulders before she slept. The team cleaned and sorted out the boat, and then we went to watch the daughter of our host’s domestic worker at a swimming lesson and met Ingrid from Environ. We receive some amazing products too. Tonight, we are having a braai, and tomorrow is a rest day due to the howling winds. 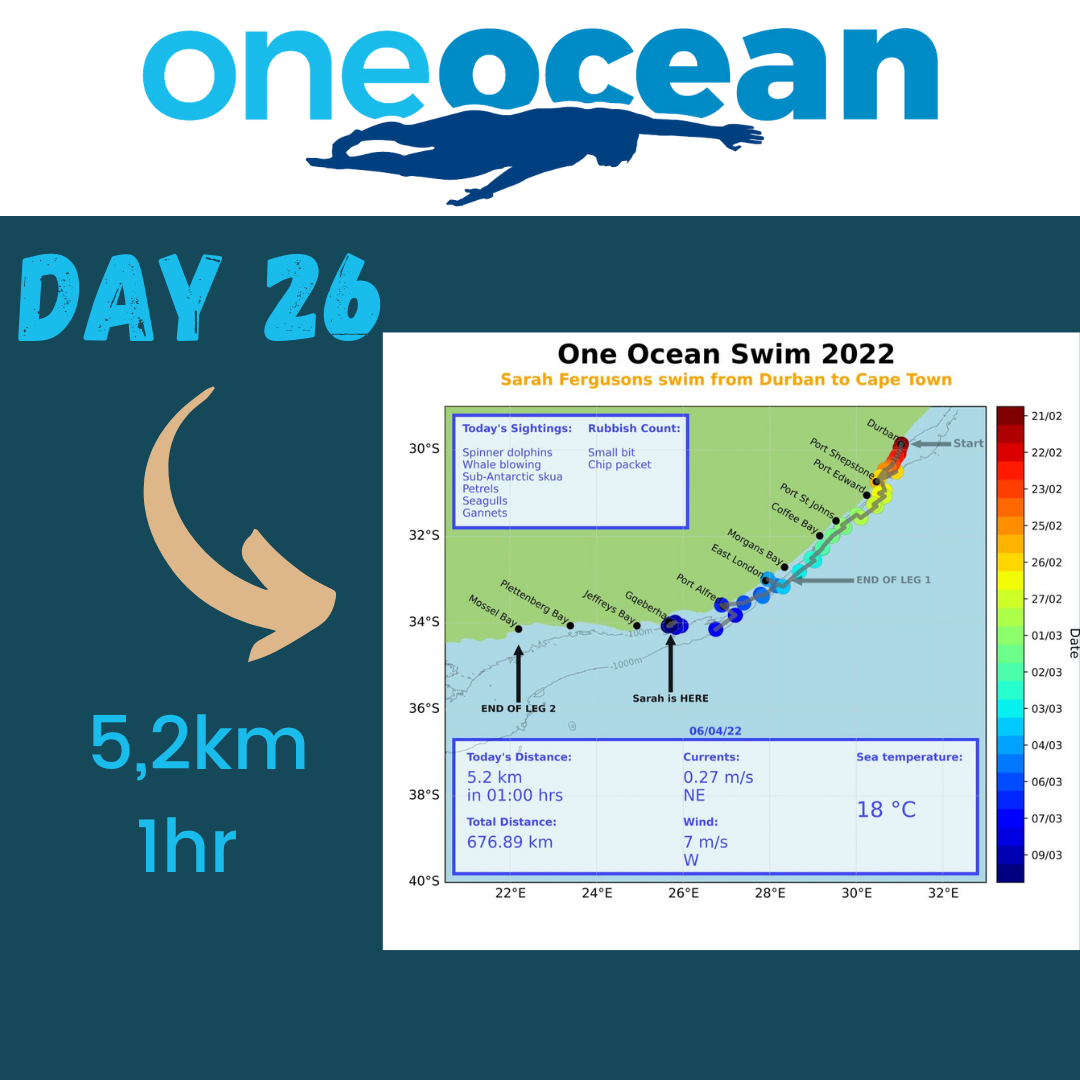