Day 27 – completed! We set off from the harbour just after 6:30 am today with Kim’s daughter Jasmine and Kim’s Dad (Mike) joining us. It was very chilly as a cold front throughout the country was coming, with snow expected in some places.

The wind wasn’t predicted, but there was some rain to come. The ride out was smooth until we left the shelter of the bay. It then started getting bumpy. On our way out, we came across some bottlenose dolphins hunting and making a bait ball with gannets, cormorants and seagulls. Skua was circling above, taking advantage of the fish on the surface.

We got to our start point to discover a stronger wind than predicted and a minimal/ negligible current. It was decision making time again, and I was tired of it all. The constant change of plan at the last minute has taken its toll, and today was the final straw for me.

However, we opted to swim South. We were hoping the wind would die down soon, as it was predicted to do so. There was also a risk that the current would change direction, so whatever we decided was a gamble. I stepped into the water and started swimming. It was bumpy and impossible to get a rhythm going. I kept swallowing water and hitting my hand short into the incoming swell. The temperature had dropped slightly to just below 18 degrees, and the air outside was even colder. It was better in the water, so I told myself.

I quickly realised I was making minimal progress, but I was not getting back on the boat to fight South and swim North after being wet. We did that yesterday, and it was not ideal. I decided to use this as a mental test to see how long I could go mentally in these stupid conditions. I also thought it could be a good test to see how long I could go in the cooler water and what my recovery time would be afterwards.

That first hour was brutal. I skipped feeds and was grumpy and miserable. I tried to be positive and savour the fact that I was in a wild ocean doing what I loved. Even though progress was slow, I was still moving forward. The constant mental battle off the back of 26 days of tough swimming in variable conditions and funding issues really made it hard for me to stay positive or even shift my mindset. I opted to stay in for 2 hours and then call it quits.

Murphy’s law decided that at 1hour 45, it would calm down, and swimming became more pleasant. The cold wasn’t a threat anymore, for some reason, and I had a rhythm. Unfortunately, by then, I was spent. Below is a comment to the group of supporters of how I felt today:

That was the toughest swim I’ve done to date. The constant change in conditions and daily decision making is taking its toll. Combined with too much bad weather, off days, and the daily battle for funding, it’s getting so hard to keep going in these conditions. We managed 4.4km in two hours against the wind, which eventually died down, but mentally I was broken. We are still 4.4km closer to Cape Town, which is positive. Tomorrow will be another tough call due to strong Easterly winds. I will keep you updated.

I also saw a lot of small bits of plastic in the water today. I got out, changed into my new fry suit and had a grumpy ride home. Today was tough, and I am a little done and spent. We will reassess tomorrow. 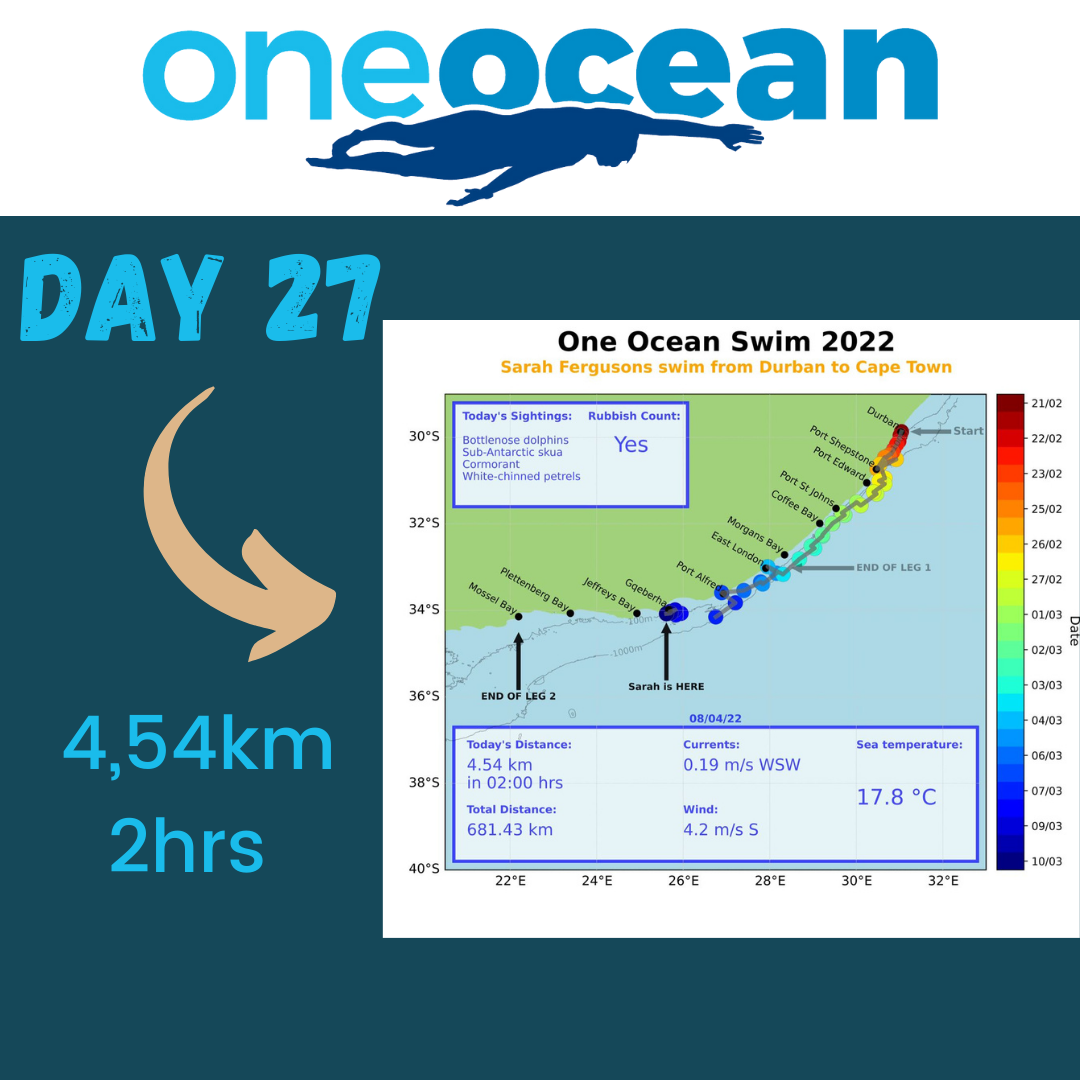