Wow, what a Day 28! I woke up after a restless night’s sleep. Everything is aching. I can’t lie on the right side of my body for very long as my shoulder and elbow ache. On my left-hand side, my hip aches. I also have lower backaches.

I was dreading the swim today, as last night there was talk of big winds and a horrible drive out to the start of the swim. Every day is different, so I have stopped having any expectations.

We had decided last night that if the wind was already pumping in town, we would not launch. After such a bad night’s sleep, I was hoping secretly that the wind was pumping. However, every day we do not swim costs money we do not have, so I had to try.

We headed to meet Jake from Raggy Charters at the harbour at 5:45 am. We were on the ocean just after 6 am, and it was calm and beautiful. We had about a 40km boat ride to the start of the swim so that I could do a 20km swim with the East wind South. We had a gap between Kenton and PE of about 60km.

The gamble, as always, was if I could manage 20km in the colder water and how long would it take. The current was playing tricks on Cassie, and we had to gamble again. I had already told Cassie that he was making all decisions, and I would listen to him. I was done making gambles and bargaining with the ocean.

The wind was a lot lighter than predicted, and there was minimal current. We opted to shoot for 20km and if there was a gap, then so be it. On route, we saw a bride’s whale spouting and some seals. There were loads of birds too, all searching for fish.

We eventually got to our start, and in I jumped in. The water was just under 19 degrees, so a little warmer than the previous day. The first hour was tough, as I battled my mind and the elements. My lower back was still sore so each time I extended too much, it would tweak. My pace was just under 15 minutes a km which meant I had a 5-hour swim to get 20km if I did not want to leave another gap. That was a big ask considering my mental state due to yesterday’s dismal swim. My mind was also tired.

I decided I needed to do at least 3 hours and then take a moment to reassess. There was not much to see, but the water was a lot clearer than the last 3 days of swimming. There were however loads of birds swooping low, so that kept me entertained for a while.

The temperature dropped progressively as I swam, which did not help matters. At 2 and a half hours, Sarah suggested I call it at 10km, but I wanted to push on. I told her I would do another 30 minutes and reassess. I was starting to feel better in the water.

At 3 hours, I felt good and opted to aim for 4 hours. That would leave me with about a 4km gap, and maybe I could keep pushing to fill it. Shortly after the 3-hour mark, 2 juvenile seals joined me which was quite exciting. However, I am not as familiar with seals as I am with dolphins, and they move so swiftly, so it is a little disconcerting.

They dived in and around me so fast it became disorientating, and then the one bared its teeth at me. What’s worse is that it was so close to my face that I completely freaked out! I told Andy, and he just laughed and said they were playing and they were harmless. It happened one too many times and too close to comfort. I was feeling too edgy, so I decided to get out of the water. One was so close to my toes that I really thought it would bite me!

I quickly hopped into the boat and got warm and dry in my new dry suit. Thankfully, I had minimal shivering compared to usual. The water had actually started warming up again at the end of my swim. It was a little disappointing not reaching 4 hours as I had planned. Yet, I had closed the gap to less than 10km, and we had to come back that way after the other gap from Kenton towards PE. So we did well.

I was happy with the swim in the end. It was a tough ask off the back of the past week of frustration, but I DID IT! 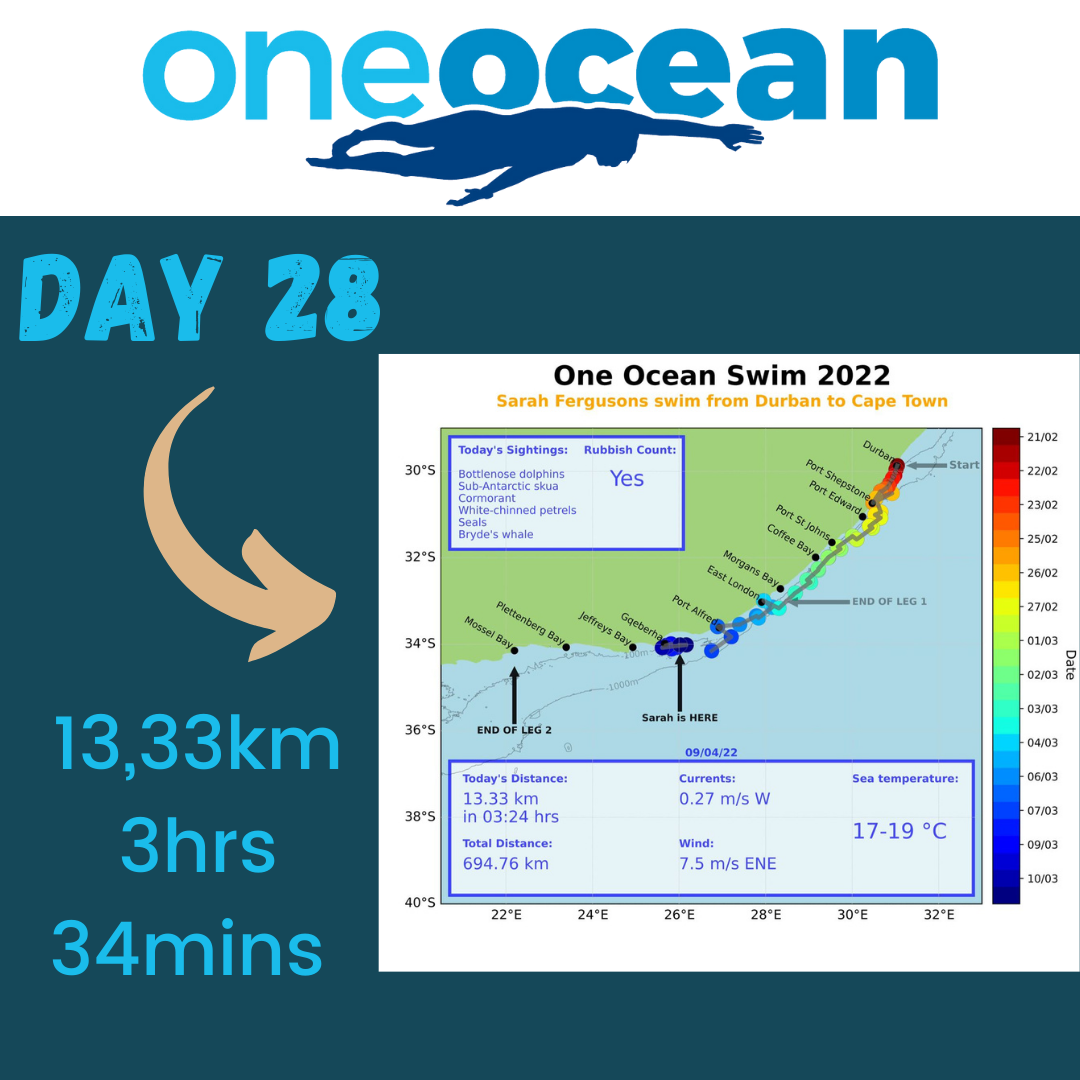