Day 29 was another rest day. Yesterday was, thankfully, a productive day. We headed to Port Alfred school to give a talk to both the high school and junior school. It was great. I love seeing young kids so intrigued and involved in conversations. They are our future and the reason I am doing what I am doing. After the talk, we met up with my cousins for a coffee before heading home to prep for today.

We went out for dinner, which was a blessing, saving us from cooking. We had another early 4:15 am wakeup after a relatively restless night’s sleep. We then set off to Kenton and finally managed to launch just after 6:30 am. The boat ride to get to the start was long. I felt very seasick and was not in a good mental space. It was 2 and a half hours of mental agony. I was not in the right headspace that I needed to be in for a possible 6-hour swim.

This was the first time Sarah had ever had to do a prep talk for me. It was so hard. I procrastinated getting in the water, but eventually, I somersaulted in, and as soon as I landed, something in my brain triggered, and I was okay.

The water was blue and warm at 22.5 degrees, so I was off. During the first 30 minutes, we managed 6km at a flying pace, and then it started slowing down a bit. The pace went from 11km an hour to 7/8km an hour, and the temperature slowly started dropping. The fast current would have pulled us out to sea so, we had to dip out. Having said that, it was still fast, at an average pace of 48 sec per 100m, which is faster than the senior men who went to Commonwealth trials for the 100m freestyle last week in South Africa!

Sarah jumped in at 2 and a half hours to join. She swam on and off between getting my feeds ready. In the last 90 minutes, the water-dipped to just under 19 degrees. The temperature change was noticeable, but it was still manageable. I really wanted to get 40km under the belt. So that we only have 20km to finish the gap tomorrow. I was aiming for 5 hours, but at 4 and a half, I was tired physically, and I knew if I pushed it, tomorrow would be too hard. At this point, I was mentally exhausted too and was struggling to keep going.

I called the swim at 4 hour 40minutes. Yet, I am very happy with what I achieved in those circumstances. Tomorrow we will have to do another big swim to try and close the gap while the weather is good.

After getting out, we had a 75km ride back to PE. We arrived at the harbour 3 hours later. I was super cold and hungry. I then had a bath and some food. Later, I ate again and retired for an early night. 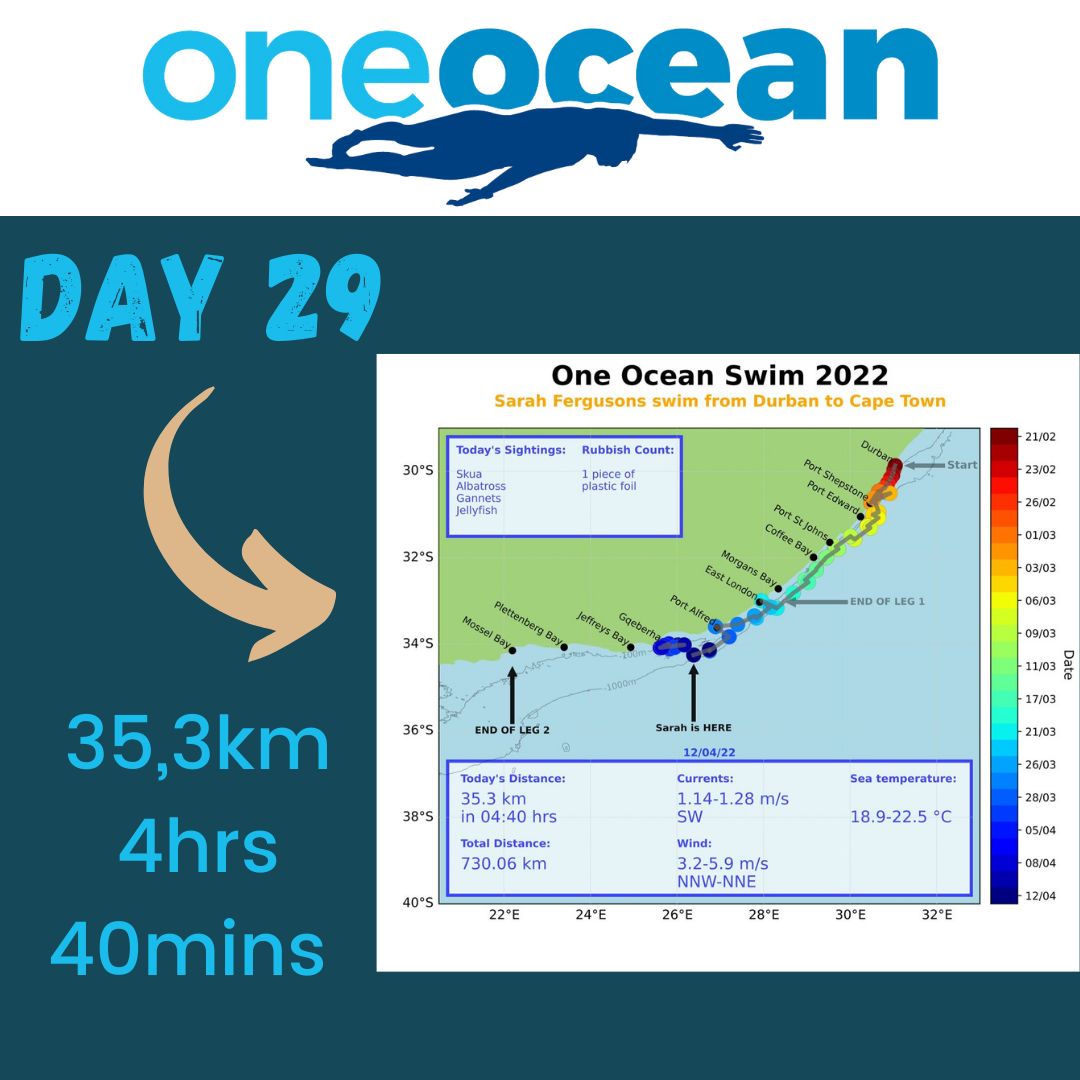