Day 13, and thankfully we had a slightly later start, as we are finally staying closer to the launch site! I was up at 4 am after a decent sleep. We all met the boat at 5:30 am. Today, Angelika was finally able to join us on the boat as she did not have to drive anywhere to collect us.

We were treated to a brief but beautiful sunrise and launched out through the river at Port St Johns from the Spotted Grunter. Vernon Maylon has kindly hosted us here for as long as we need, and we are incredibly grateful for that. The launch went smoothly, and we opted to head North, close to the coast catching the incredible coastline on the route. The cliffs of the Transkei are breathtaking, and it was incredibly beautiful to see waterfalls falling into the ocean. We also saw cows and goats on the beach and formations that looked like rock cathedrals. John was in his element, showing us all his local hangouts, and Andy showed us where he had his honeymoon the year that I was born!

We had some juvenile gannets accompany us, as well as a few bottlenose dolphins surfing our wave. At Waterfall Bluff (one of 2 waterfalls that fall directly into the ocean from land in SA), we headed 20km out to sea to our start point. The drive was long and bumpy, and I opted to have a power nap on the deck en route. Today I was not particularly amped to swim. I was still a little fatigued from the mammoth 6 hours swim the previous day and emotionally overwhelmed that I was on East Coast Radio in the morning, as well as receiving a massive donation from my Dad. The support from the public has been so encouraging as we battle on in our journey. Yet, we still have no major sponsor, so we do not know how far we can get.

The current was fast at 100m per minute, but there was a South West wind against it, so it was going to be an interesting swim. I backwards flopped into the ocean and set off. I could feel it was fast as there was almost no resistance. However, it was bumpy and really tough going against the bump.

My pace was fast – yet still, way under the target required to break the current assisted world record for the fasted 100km. The current record (excuse the pun!) is 12 hours 21, and I needed to swim at 43sec per 100 or 7km per hour to break that. I set off at 5km for the first 30min and 10km in the first hour. I was flying, but I knew I did not have a 10-hour swim in me. I tossed and turned in my mind wondering if I could find the grit to push through and set a world record. Logic prevailed… I am not here to set records. I am swimming to spread a message against plastic pollution. So, pulling a 10-hour swim off the back of over 150km already this week was not wise. The cost was too high. It would take me more than 2 days to recover from that feeling. I figured it would be better to do 3 days of 4+ hours of swimming, clocking 35+km a session, rather than pushing myself to the limit at the cost of a long term target. I had to be wise and swim within myself. It was an easy decision in the end as I was already tightening up. At this point, I have not even got one-third of the way to Cape Town. I still have a long way to go, and I need to be clever at managing my swims.

At 2 and a half hours, I asked Sarah to join me, and she happily did. She immediately commented on the bump and how tough it was, which made me feel better about my decision. I decided to aim for 40km and call Angelika to join me for the last few km. As I was swimming, the crew spotted 2 humpback whales about 300m from me. Unfortunately, they made no effort to come to say hi, so I continued my journey.

At 4 hours, Sarah hopped out, and Angelika jumped in for the last bit. It was so great to share the ocean with her for a bit, and she loved every minute of it! I decided to do a mini time trial for fun at the end, so I did a timed 100m sprint in 38seconds! It was such fun swimming that fast! I cooled down and ended the day on 42km – a marathon just at Port St Johns.

Sadly, the good day was dampened when Cassie informed me that he had lost the feed of my rope Tupperware and water bottle. I was devastated. Firstly, I had now contributed to the very thing I am swimming to fight against, and I was concerned that the rope would get caught up in some poor creature. Secondly, that rope is sentimental to me. It has been with me since I first started open water swimming. We tried in vain to backtrack and find it, but sadly it was lost to the ocean. I am sorry to all the marine life that may suffer from this poor oversight.

We trundled into Port St Johns and headed home. I was exhausted and need rest. Tomorrow we battle again.

Sights seen: carbs and barnacles on a slip slop; Foil bits in the water; Juvenile gannets; Swam past 2 humpback whales 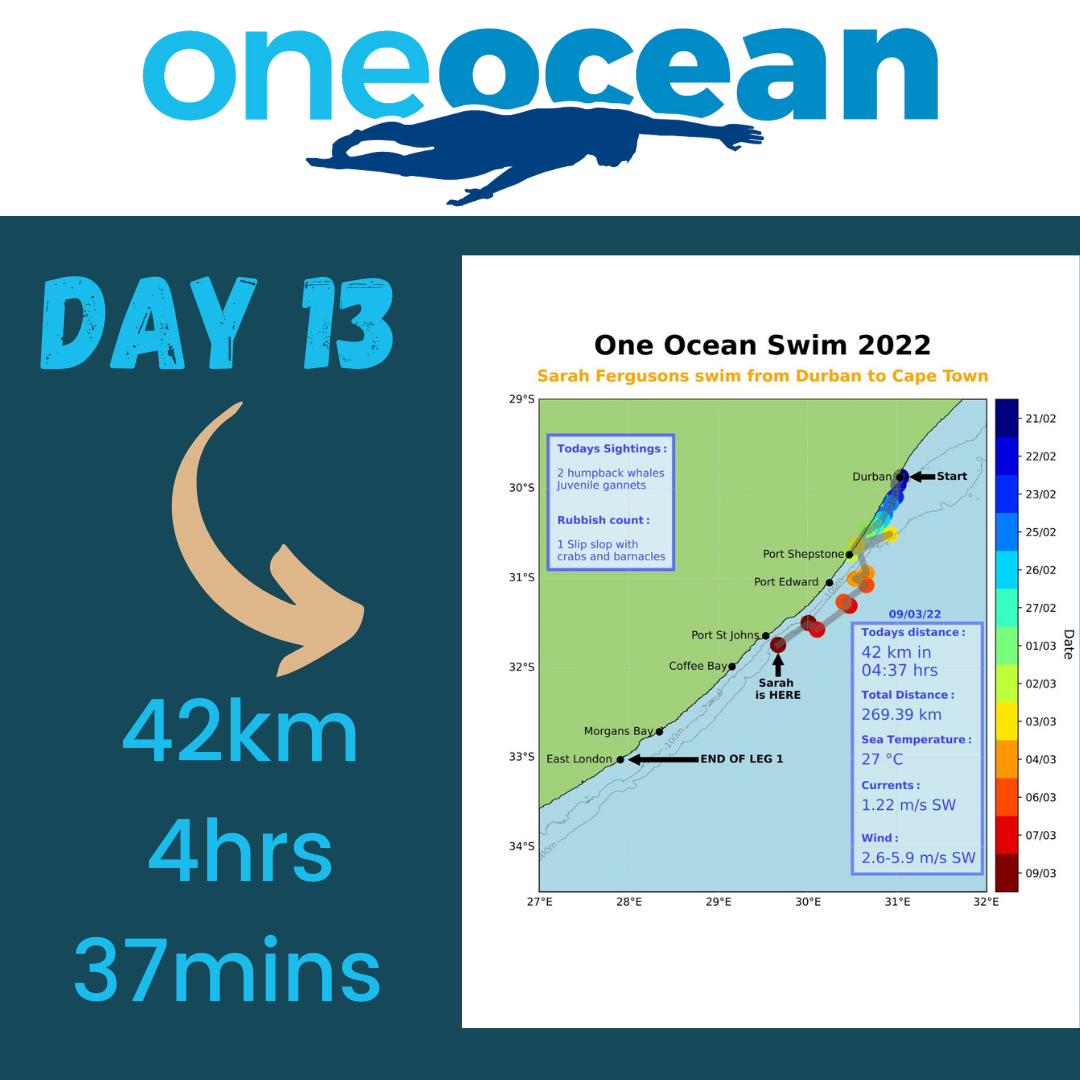