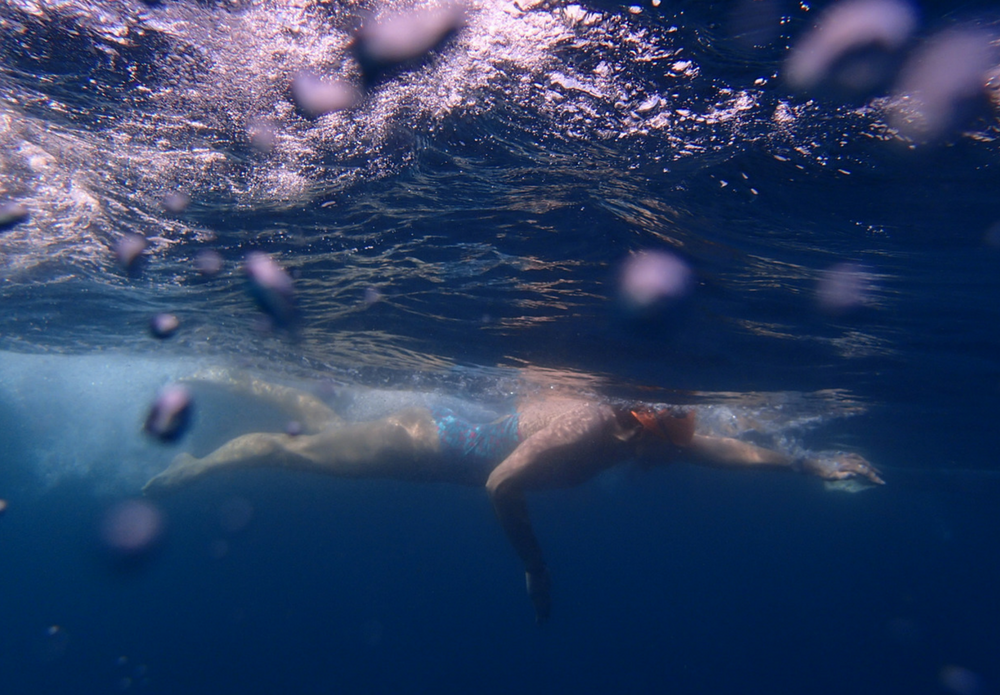 Yesterday I had the privilege of competing in the 3rd (now annual) 4 Elements Ocean Challenge. There was quite a big build up to the event and lots of new comers keen to challenge themselves. The week before the swim conditions were forecast to be unswimmable with massive swells. There was even talk of the shark nets being lifted due to sardines. None of these things bother me, in fact, the bigger/ choppier the better. I am game for a challenge and the bigger swell and choppy conditions tend to suit me well. But this swim is aimed at all swimmers and the primary goal is to create awareness for the environment and shocking degradation of our oceans. The more swimmers competing and helping to create that awareness the better.

I have learnt not to trust the charts and to go with whatever happens on the day and so was not too phased in the build up to the swim but at the same time was very aware that to change the date of an organised swim comes with massive complications and if at all possible it is best to stick to the original plan, safety being paramount. The organisers had a tough call to make and in the end decided to stick to the date planned despite less than ideal conditions. This was after all an Ocean Challenge rather than a race and the conditions provided would certainly provide a challenge!

The route was changed from north to south, to south to north allowing the swell and winds to facilitate rather than hinder swimmers. This was a good call. Conditions were choppy as it was and so extra hindrances would not have been conducive to an effective or safe race.
Thankfully the water temperature was really warm at 22 degrees and despite the icy chill in the air over 90 swimmers lined up at the start ready to compete.
I LOVE conditions like that and so from the offset made my own route and veered away from the crowd. My strategy in any open water event is to get away from the bulk of swimmers, find my rhythm and not allow anyone to overtake me as I slowly tend to overtake the overly ambitious swimmers who spring the first 400m in an adrenaline rush to get through the start. I am competitive and had spotted a few swimmers I hoped to beat, but at the same time in a swim of this nature there was no way of even seeing most of the other swimmers so I just had to swim my own race.

Which is what I did. I found myself alone quite quickly which is the way I like it and settled into a rhythm, the first pier came quickly and I had set myself a small challenge to do 5 strokes of butterfly at the beginning of every pier just for fun! That challenge became progressively harder in the choppy conditions! There were a few times I felt like I wasn’t making much forward progress as the waves tossed me about like a washing machine and it was at those times that I put my head down and just started counting strokes. I find this a very effective way to focus on trying to remain relaxed and take my focus off landmarks that I may or may not be swimming past! I have mastered my stroke count to the point that I now know how many strokes it takes to get from pier to pier as well as how many per 100m. In the first ¼ of the race I caught up with two young swimmers and stayed with them and their support ski for about 500m before pulling away and then I caught up with a guy and we were neck and neck for a good 2km before I headed out further from the shore and made my way to the finish.

I was surprised to see one of my competitors already in and I was a bit disappointed that I didn’t beat her but I swam my own race and loved every minute of it, which at the end of the day si what counts. I still felt really strong after the race and that is a really good sign for me in terms of my long term goals. I have come to realise that as competitive as I am, my long term goals override that competitiveness along with my desire to enjoy the journey. It is more important for me to enjoy my swim than break myself trying to win or beat that one person bearing in mind that this all stands me in good stead for my marathon crossing in a year’s time.

I would like to thank the organisers of the Ocean Challenge for another excellent event and for sticking to the plan despite many panicked and concerned phone calls and messages from swimmers prior to the event. It was indeed a challenge, one which everyone who entered completed and I thoroughly enjoyed it. I was warm throughout the swim and actually got hot swimming! I am stoked that I felt so strong afterwards and am looking forward to my next challenge in the next month!