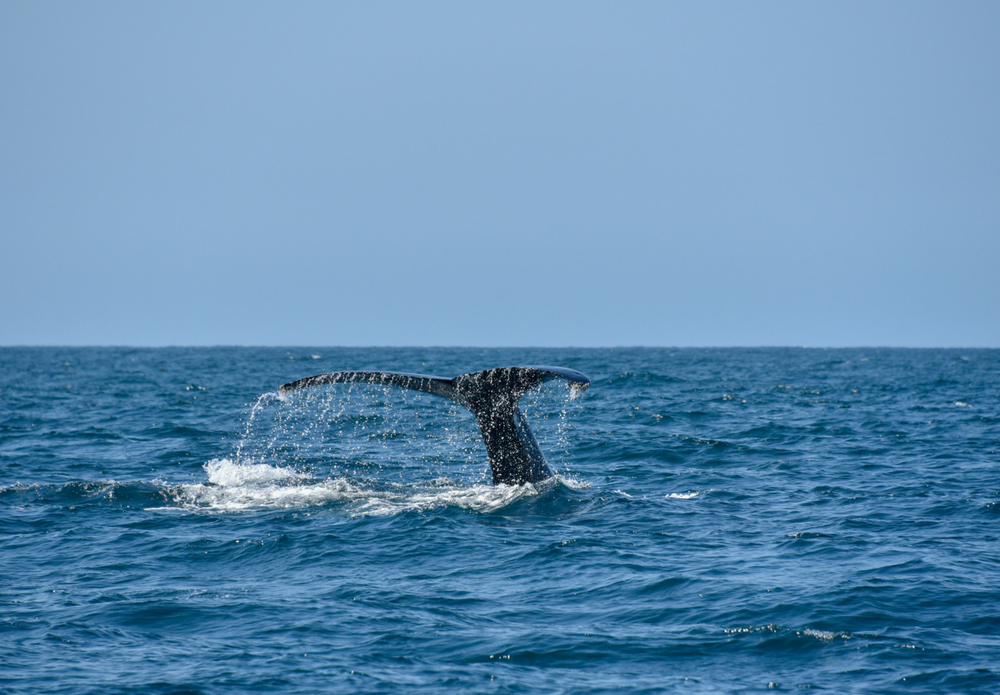 I had a restless sleep and today felt a bit like day 1 of the swim series, we were all a bit helter skelter trying to find a new rhythm in a new place with a new boat crew. I had a healthy brekkie of a smoothie, oats and left over rooibos tea with honey before we set out to meet Adventure Mania with all our gear to set off for day 5 of the swim series. The boat ride was hysterical with ACDC pumping full blast setting us in good spirits along with multiple whale sightings in shore and out to sea. A sure good sign for a good swim day.

Just over an hour later we arrived at Black rock and John, Sarah and I swam to shore. The water was fresh at 21.9C and we met Isimangaliso’s representative Sam and Wofty on the beach. (They had driven up by car to offer land support for the swim- another first!)

This time last year we were preparing to swim my very first channel crossing the Ka’iwi channel swim and so I wanted to dedicate today’s swim to the legendary Linda Kaiser who was instrumental in that crossing being a success for me and my team. Linda and I met via e-mail a little over 6 years ago and were in regular contact in the build up to my channel crossing. A week before we were due to leave we still had no accommodation and no budget for one and Linda graciously offered for us to stay in her home. This was such a blessing. I could not believe that I was not only finally going to get to meet one of my real life heroes and inspirations, but stay in her home as well. Linda is the only woman to have swum all the channels in Hawa’ii and last year was officially inducted into the open water swimming hall of fame. A well-earned badge to her name. Linda is humble and swims simply for the joy of it and has a wealth of knowledge and experience that she was not afraid to share with me. She not only opened up her home to us, but introduced us to her community and really showed us the Aloha spirit. At the time Linda was fighting lung cancer which we were unaware of until we arrived at her home. She has had an incredibly tough year reaching stage 4 lung cancer, but Linda is a fighter and has and still is fighting the battle against cancer.

Earlier this year John arranged a swim for any open water swimmer to dedicate a swim anywhere in the world to Linda to show her support from fellow ocean lovers and try to help raise some funds for her very costly treatment. I felt it was fitting for us to dedicate today’s swim to a women who I respect and admire and is daily in my prayers for a full recovery. If you would like to support Linda you can donate here or simply send an encouraging message with #Linda and she will appreciate it. https://www.gofundme.com/LINDAKAISER

As we entered the water we spotted a turtle! So fitting considering they were my absolute best in Hawaii! We swam about 1km out to sea and then had the wind and current behind our backs for the rest of the way. It was cold in the first few km as the sun kept disappearing behind the clouds. No sun makes a massive difference to body temperature as any open water swimmer will know and it also makes the sea gloomy and eerie. I did feel a little vulnerable out there knowing that my old next door neighbour had been bitten by a tiger shark a few years ago whilst swimming after a dive. I was also aware that there were a few whales around and as much as it is a dream of mine to swim with one, I do have a deep respect for them and the thought of being face to face with one of these massive beasts is quite daunting!

I was pretty mute for the first 5km trying to conserve energy as I was not very warm, but soon warmed up and with it my spirits were up. We were within 200 to 500m away from whales twice and I dived down deep to see if I could hear them, but sadly could not. The rest of the swim was a fun downwind down current swim and at one point I was flying along at 1.16/100m which is pretty fast for an average pace over 19km!
I was keen to push to 20km, but we had to prioritise a safe finish and so I swam in with John and Sarah to finish at Mabibi. Going back out to the boat through the waves was interesting as I got pummelled a few times, I was too tired to fight and so just let the wave take me! Came home to an Epson slat bath, massage and delicious goulash stew with beetroot sweet potato and butternut mash with lentil salad. I am very ready for an early night as I am well fatigued and am hoping to do a similar swim tomorrow. With only 31km to I am excited to finish and have surprised myself at getting through as much as I have to this point.
Stats for today. 4hr15 time in the water, start time 9:29am; distance 19km pace 1.21/100 calories- 4214. Fastest lap (1km) 7:48.87; slowest lap 18;56(stopped to swim with 3 baby sharks and another turtle on the reef!)