Press Release: Silence for the Sharks 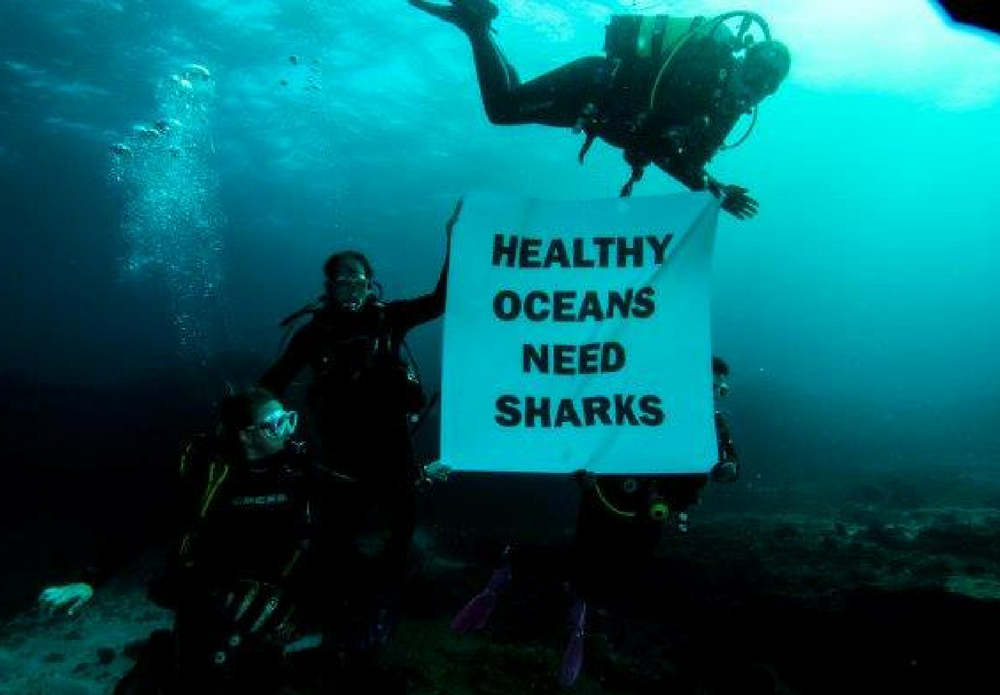 There was a wave of support shown for the oceans and its inhabitant marine life at Scottburgh (Aliwal Shoal) and Shelly Beach (Protea Banks) on the KwaZulu-Natal South Coast on Saturday morning (Saturday, 4 June) as conservationists and concerned community members congregated to celebrate World Oceans Day with the Silence of the Sharks and Paddle Out for Sharks initiatives. Silence of the Sharks was endorsed by UGU South Coast Tourism.

The fifth annual Paddle Out for Sharks conservation drive at Scottburgh attracted backing on both land and sea from jetski pilots, surfers, Scottburgh Nippers, open ocean swimmers, Hillcrest Primary schoolchildren, the NSRI land-based crew and members of the community who are passionate about the oceans. The Harley Owners’ Group (HOGS) Durban Chapter also joined in, driving from Durban to Scottburgh Main Beach.

“As The Paddle Out for Sharks organizers we are encouraged to see that what we started in 2012, as a grassroots movement, has been embraced and taken up by people on the ground, who have made this day their own. Communities are starting to take back control, in making a bold statement about the plight of our sharks and oceans. This event is about awareness and engagement, so that we may all contribute to improving the health of our oceans,” said Amanda Barratt, Organizer of Paddle Out for Sharks.

The hour-long tribute was followed by South Africa’s largest underwater protest, Silence of the Sharks, endorsed by UGU South Coast Tourism. This forms the second in a series of international underwater protests that seeks to highlight the plight of sharks everywhere. The South Coast’s Silence of Sharks was supported, at Aliwal Shoal, by more than 50 scuba divers who held banners to protest the decimation of more than 100 million sharks annually.

Likewise, the Shelly Beach undertaking saw huge support with CFreaks and African Dive Adventures hosting over 120 people on the boats and on shore, including children from St Martin’s School for the Disabled, for the paddle out. After a boat trip and tour by the National Sea Rescue Institute (NSRI), the children were given a talk by legendary instructor, Karen Tredger, on sharks and their importance to the ecosystem. Thereafter the children were treated to a ride on bikes with the KZN President’s Club and then participated in a fun sandcastle building competition – led by a professional builder – as well as face painting. Each child received donated snacks and T-shirts.

“Everything just came together to ensure an awesome event. Despite the big swells and poor weather conditions forecast, we had a perfect weather window which allowed us to paddle out and hold the scuba diving component. The sea conditions were absolutely brilliant with visibility of 5m the previous day clearing up to an incredible 20m on the day of the event.”

She said the divers opted for a shark dive for the protest and were not only joined by black-tip sharks and a number of raggies but were visited by a pod of inquisitive dolphins too.

“The message was loud and clear; our sharks and marine life need to be protected,” said Symcox. “This was really a landmark event which saw involvement from a broad spectrum of ocean-users and the community who showed their support for the campaign against illegal fishing trawlers in our waters.”
Symcox said, in addition to the Paddle Out for Sharks and Silence of the Sharks initiatives, support was shown for World Ocean’s Day (8 June) ‘healthy oceans, healthy planet’ theme.

“The World Ocean’s Day celebration was a gathering of true watermen and women, united by their love and respect for the ocean and their desire to protect its marine life. It was really encouraging to see so many youngsters at the event, because, in the end, this is all for them.”