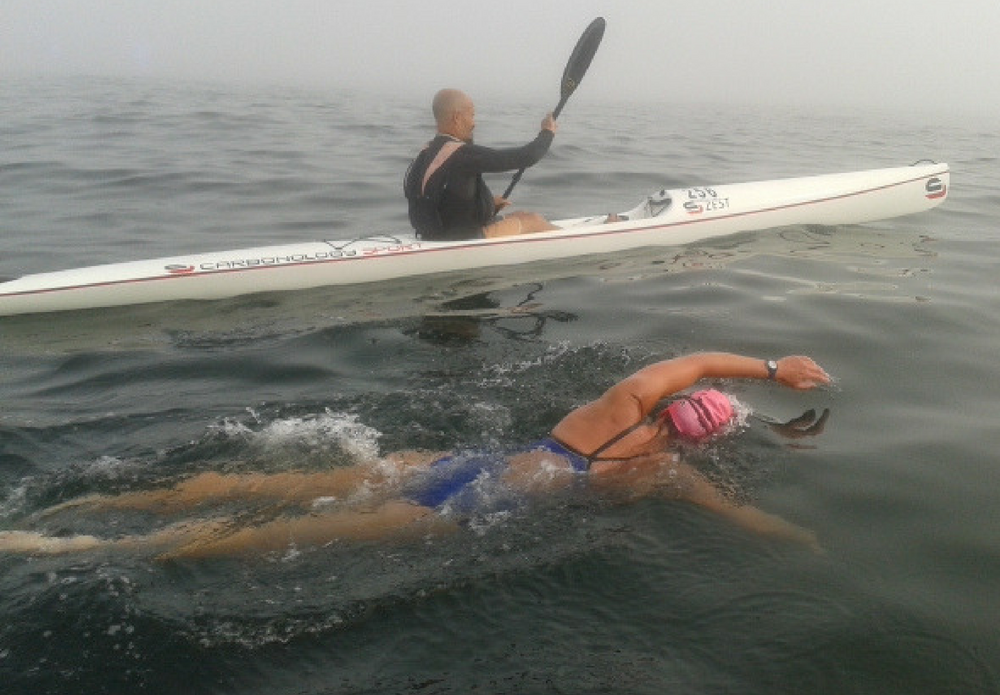 Open water swimming is a tough sport, mentally as well as physically. It is entirely dependent on Mother Nature: she has the final say and will humble the strongest, most accomplished open water swimmer on any given day.

I recently spent three weeks in Cape Town on holiday hoping for the perfect day to swim around Cape Point. This was to be one of my preparation swims in my build-up to a Hawaii channel crossing I am planning to do in 2016. Out of the 21 days I was in Cape Town, only one day was looking positive, the day before I left to return to Durban. Sunday 4 January was supposed to be ideal for my swim. I had spent the last 20 days preparing mentally and doing a few cold water races at Clifton to prepare for the swim. I was ready. Excited.

Late on Saturday afternoon after I had told all my supporters we were on for Cape Point, I received a phone call informing me that conditions were no longer looking good, there was a big swell coming through and even the local fisherman had been warned not to go out to sea the following day. My boat skipper was still fairly confident to take me out, but it would mean changing the direction of the original swim which would mean swimming into the cold water and into strong rips. This did not bode well for all the mental preparation I had done and after a few back and forth messages between my skipper, sports psychologist and close friend, I opted to postpone the swim until a better day. My skipper felt bad for me and suggested I do a Robben Island crossing instead.

Those who know me, know that I have never been keen to do Robben Island for the simple reason that I believe it is too conventional. But I figured I had paid for the skipper and had prepared to do a swim and so why not do Robben Island and tick the box. I also knew it would be a good training swim.I had less than half a day to switch my preparation from a spectacular, wild, scenic, dangerous swim to a relatively uneventful straight-forward swim.

From a cold water into warmer water swim around a point to a crossing in only cold water. I was quite excited as well as a little apprehensive. I had never spent more than 90 minutes in cold water. I wasn’t sure what my body was capable of. The morning started at 4.30 as my amazing parents drove me to collect my trainer and head to Big Bay to meet the skipper and assess conditions. I was amped, a little apprehensive about the unknown but ready.

On the way I received a message from the skipper telling me that there was thick mist and we wouldn’t be able to see anything but he was still happy to take me if I was happy. Nothing was going to stop me now and if my incredibly experienced skipper was prepared to take me, I trusted him implicitly and I was ready.

We arrived and were met by some close friends, my amazing sister and her three gorgeous, sleepy kids. The mist was thick and we couldn’t even see the island. I was very lucky that my experienced seconder paddler from Durban was in Cape Town for a wedding (John seconded me for my Umhlanga to Durban swim and had offered to paddle for my Robben Island crossing). We set out in the speed boat with my anxious family looking on and met John past the breakers where we pulled his ski onto the boat and set off for the island in the mist.

On the way we saw a (non lethal) box jellyfish. It was beautiful but my initial reaction was one of fear when I heard box and jellyfish in one sentence. I was quickly calmed when I heard they were non lethal and that I wouldn’t even feel them.The water was relatively warm at 14 degrees and I was confident I could cope in that temperature for under 2 hours despite my relatively low body fat. Besides the jellyfish and a friendly seal we spotted nothing on the way to the island. The boat ride seemed long and I was starting to second-guess my decision to do the swim. Going across in a boat you realise how far you actually have to swim!

As we drew closer to the mist-shrowded island I was mesmerised by the solitude, away from the noise and humanity. All we could hear was the seagulls cry and a gentle lapping of water against the boat. The mist was thick and the sea full of kelp, there was an eerie silence, but I found it beautiful. The sea was as flat as a lake and I don’t think I will ever forget the peace and serenity I felt as we came approached the island. It enveloped us. Eventually we could see the pier looming out at us through the mist and I was set to go. I eased into the icy water and swam to my rock to start the swim. I had initially set out with the intention of trying to break the record set by Natalie Du Toit in 2009 (1 hour 35 minutes). I knew it was a long shot and the conditions were not conducive to breaking the record, but I figured it would be good to give myself an incentive!

The first 30 minutes I spent getting into a rhythm flanked by the speed boat with my supporters on my right and my trusty ski on my left. I had to feed every 30 minutes and even though I was feeling strong I obediently stopped after the first half an hour for a quick sip of water before continuing my swim. I was on track for the record, I was feeling good but I was swimming hard. Forty five minutes in I heard John shouting at me to pick up the pace which I did (I had drifted a bit in my mind and refocused on my goal). At my second feed (60 minutes in) I was only half way. My trainer asked me if I could go faster, but by then my hip flexors had started to cramp and I knew there was no way I would make the record, so I actively chose to swim slower and more controlled and just enjoy the rest of the swim. I knew that the longer I was in the water the better in terms of my long-term preparation. During the third section I started to feel cold and it got a little choppy. I didn’t want the cold to ruin my swim so visualised myself on a hot tropical island. That seemed to do the trick because before I knew it I had 1800m to go, I was feeling great and from the last 800m the mist cleared, the sun came out, the water temperature increased and another friend of mine paddled out in his double ski and accompanied me to the finish.

I finished the swim in 2.02 just behind Theo Yach

My mom was waiting with open arms and tears to welcome me to land. It was a great swim. I loved every minute and it was a huge confidence booster for me in terms of cold water swimming. I finished the swim in 2.02 just behind Theo Yach (a famous open water swimmer who had just swum his 86th crossing!). It was a privelage to shake his hand after the swim.

I am ready for Cape Point and other challenges as they present themselves as I prepare for my 40km channel crossing in Hawaii next year. I am swimming for ocean conservation awareness and in support of development in rural youth athletes. For more information or to sponsor me please visit my website www.sarahferguson.co.za