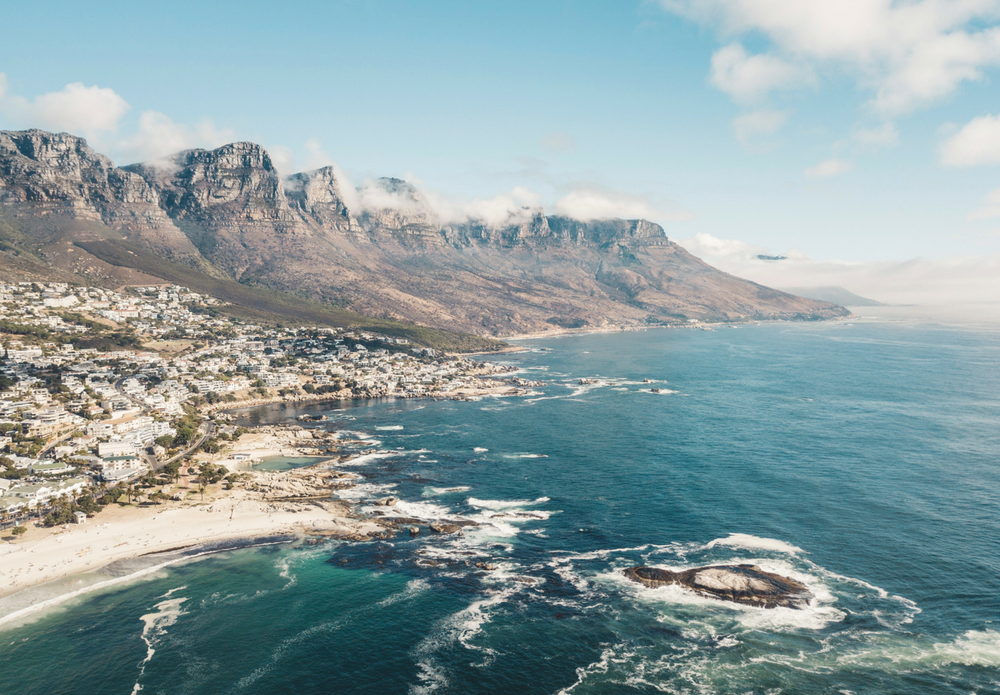 It looked like a perfect day. The water was clear, clean and reflective. The sky was overcast, keeping in a little warmth and there was no wind. Not what we had anticipated and not what I signed up for. I had planned to do a training swim in Cape Town under certain criteria. The water needed to be over 12 degrees Celsius and I did not want it to be flat. The temperature was 14 degrees, but the water appeared flat. Derrick (the skipper) had cancelled a race with 140 swimmers because of the forecast swell so he was not too stoked either!

I had a friend, Kim swimming with me and she was quite pleased that the water was calm! We are both training for our first channel crossing. Hers is the English channel- 21 miles (35km) the average water temperature is between 16 & 18 degrees. Kim is 49 and has only been swimming for the last 5 years. She has 2 teenage daughters and I think it is amazing that she manages to fit in time to train for such a tough crossing. She does not seem to feel the cold! I met Kim on the last night swimming camp I attended in October last year. We both needed a challenging swim under our belt and we swim at a similar pace so we were quite excited and a little nervous about the task at hand.

My biggest concern was the cold coming from 26 degree water in Durban to 14 degrees with no acclimatisation was a challenge. Kim was concerned about big swells and marine life especially after a fellow swimmer was recently bitten by a seal at Big Bay! So together we made a great team!

My parents had decided to accompany me on the boat and my boyfriend was designated seconder in charge of feeding us! The ride out turned out to be rather choppy. The closer we got to the island, the choppier the water got, the swell was picking up. I don’t always enjoy the boat ride to the start. It makes you realise how far you are actually swimming. I tried not to think about the swim as we rode out against the swell with water spraying in our faces and trying not to get too jolted by the choppy seas. At one point I spotted a lone blue bottle and we saw some dolphins in the distance on the way out. I had had very little time to prepare for the swim so this was going to be an interesting challenge!

When we arrived at the island, the waves were breaking out at whale rock and the swell was big. In order to make the swim official and register it with CLDSA (Cape Long Distance Swimming Association) I would have to be dropped off and swim to the rocks at shore and start the swim from there. I was in two minds about registering the swim as it was and I had no specific target to chase as Derrick could not remember the record for that specific swim! I also did not have a watch for the first time and so I couldn’t even pace myself that way! I still wanted a shot just in case so I said I would swim to the rocks and Kim was happy to jump in and meet me as I headed back towards the boat.

As I jumped in, the cold hit me and took my breathe away. There was no way I was going to navigate my way alone through the kelp to the start. I turned back towards the boat and started swimming. I was not ready for this physically, but I had a point to prove to myself and so began a painful swim back to shore. Kim jumped in shortly after that when they realised I wasn’t making it official and we set off. Kim set a brisk pace and between trying to calm myself down and tell myself it wasn’t that cold, I can do this and actually get into some kind of a rhythm, I was struggling to keep up with Kim. I tend to take about 3km to warm up so it was a tough pace to start so fast, but I knew in order to keep warm I needed to swim fast and keep my metabolism burning.

The first 30 minutes seemed to take forever. I was ready to get back in the boat and it took a huge amount of mental strength and persuasion to keep going. Eventually we were called for our first feed and I opted for my hot Milo straight away! I was cold! We didn’t linger on the feed and set back into a much more comfortable pace. The next 30 minutes seemed to fly by and before I knew it we were up for a second feed. By then I was starting to acclimatise to the cold and could finally start trying to enjoy the swim. The water was glassy and clean and there was a nice big gentle swell assisting us as we swam. I started to enjoy the feeling (or lack of feeling!) of the cold water on my skin and the gentle splish splash of our hands entering the water. I enjoyed watching my support team taking pictures, sipping coffee and having general conversation.

I was cold and just wanted to get out

I fluctuated between fighting to stay in the water amidst the discomfort of feeling cold, and ignoring it, focusing on swimming from feed to feed and attempting to zone out where possible.
I think I managed to zone out for half an hour of the entire swim, the rest of the time was an active mental battle between mind and body, in the end I managed to win and push through. The last 3km were painful, my body seized up by then, my shoulders and thoracic spine felt like mud and my hip flexors had started to cramp. I was cold and just wanted to get out. We had the option of swimming through to 3 anchor bay or to Oceana or getting on the boat as we had already done 11km. Kim and I swam another 400m and then we called it, I had achieved what I had wanted to. It was a great training swim and a huge boost for my mind to know what I can push myself through.

It was humbling realising I have another 30km to swim, but knowing it will be in water almost double that temperature does give me something o look forward to.

Every training swim I do that can push my mind or body to the limit is so good for my preparation and I hope to do a few more swims like that in my final build up to the Kaiwi Channel crossing.