This weekend I had the privilege of swimming in a training camp in Sterkfontein in the Free State. Just outside the town of Harrismith, Sterkfontein is one of the catchment areas of the Vaal River. Its claim to fame is having the second highest dam wall in South Africa and the highest earth fill dam.

It is the 3rd largest dam in SA and the deepest in SA. It is also incredibly clean and beautiful. I swam here once before about four years ago, in July where the water temperature was between 11 and 13 degrees, and I was borderline hyper thermic! Ever since then I have wanted to come back and swim so when this opportunity came up to attend a weekend training camp I jumped at it!

The plan was a 5km night swim on Friday night, an 8km around the island swim on Saturday and a 9km out and back on Sunday- 23km in total. I persuaded one of my training partners to join me and she took up the challenge. For me, it was an ideal test in my ability to swim longer distances in colder water in preparation for my next big swim. There ended up being 4 swimmers from Durban and 5 from Joburg in total- all female! I bought 2 seconders (Coach Sarah and Caron) with me from Durbs to come on the kayak to support the front batch of swimmers.

We set off in the boat at about 5.30pm on Friday evening to start 5km around the corner. It was a beautiful evening and we dived in as the sun was setting. The water was fresh at 17 degrees: 3-4 degrees colder than what I am accustomed to swimming in and we set off at a brisk pace to try and get the blood flowing.

As we rounded the corner the wind hit us hard and we were swimming against a forceful chop. Waves were hitting us from the side and we had to time our breathing so as not to choke on gulp fills of water. Marcelle (one of the Joburg swimmers training for the oceans 7) struggled with the chop but bravely pushed on.

I enjoy the chop, but I was not enjoying feeling cold. Everything in me was fighting to try and stay warm and conserve energy, my neck started aching from lifting it higher to breathe and the muscles around my back were seizing fighting the chill. I knew it was not going to get better as night started falling and just had to dig deep and maintain my pace. I was swimming with Annelize, my training partner from Durban (she had fins and a wetsuit) and Marcelle. We are all a similar pace and it was comforting swimming together. The rest of the swimmers were behind and with the boat trying to keep an eye on all of us, it became a little challenging. We stopped for a hot drink and a regroup (the back swimmers were towed on a rope to catch up to us). The hot Milo did the trick temporarily and I was incredibly grateful to the warm liquid heating me up me up from the inside.

We reached the crossing point and then had to make our way across the bay, by now I was cold again and picked up the pace, I was ready to get out. I tried hard to enjoy the moment and get into a comfortable rhythm but with the wind chop and the darkness setting in, I was losing that battle. About 1km from the end we were treated to a magnificent moonrise, this huge orange ball rising over the dam was stunning and helped distract me for a while.

At last end was in site and it was a little disorienting with swimmers jumping off the boat for the last few hundred metres and the boat lights flashing on and off us, but we reached the shore and I stood shivering for a few minutes waiting to get dressed before we headed back to the house for a warm bath and food. The recovery process went from being freezing cold, to warm and through the night, I battled to sleep due to the warmth and at one point thought I had a fever as I was sweating! We discovered in the morning that it was probably our body just responding to the unfamiliar cooler water and burning fuel to try and regenerate.

Day 2
We had an early start on Saturday leaving at 6am to try and avoid the wind. We changed the route to swim one way past the island and then return in the boat. The first 10 minutes were bearable and I thought I was going to enjoy the swim. I was looking forward to having the sun on my back. Sadly the weather did not play to our favour and it was gloomy and overcast for the entire swim. The chop was hectic and it was another tough swim where I had to dig deep to stay in the water. My mind kept shifting to thinking how can I sustain this for 24 hours, but, thankfully I have time on my hands.(thinking ahead to my next swim next year) There were 2 occasions where I almost felt comfortable but all in all it was a super tough swim.

I really had to dig deep and my mind and body were at war with each other, I very almost gave up at one point but thankfully rooibos tea helped me this time! We finished the swim at just over 7km and I was very glad to get out the water I was not enjoying it at all. I have forgotten how uncomfortable it is to feel cold and I kept telling myself that I had swum in colder water before and I was frustrated at myself for not being able to switch off that discomfort. It was a great battle for me and such good training prep for going forward. 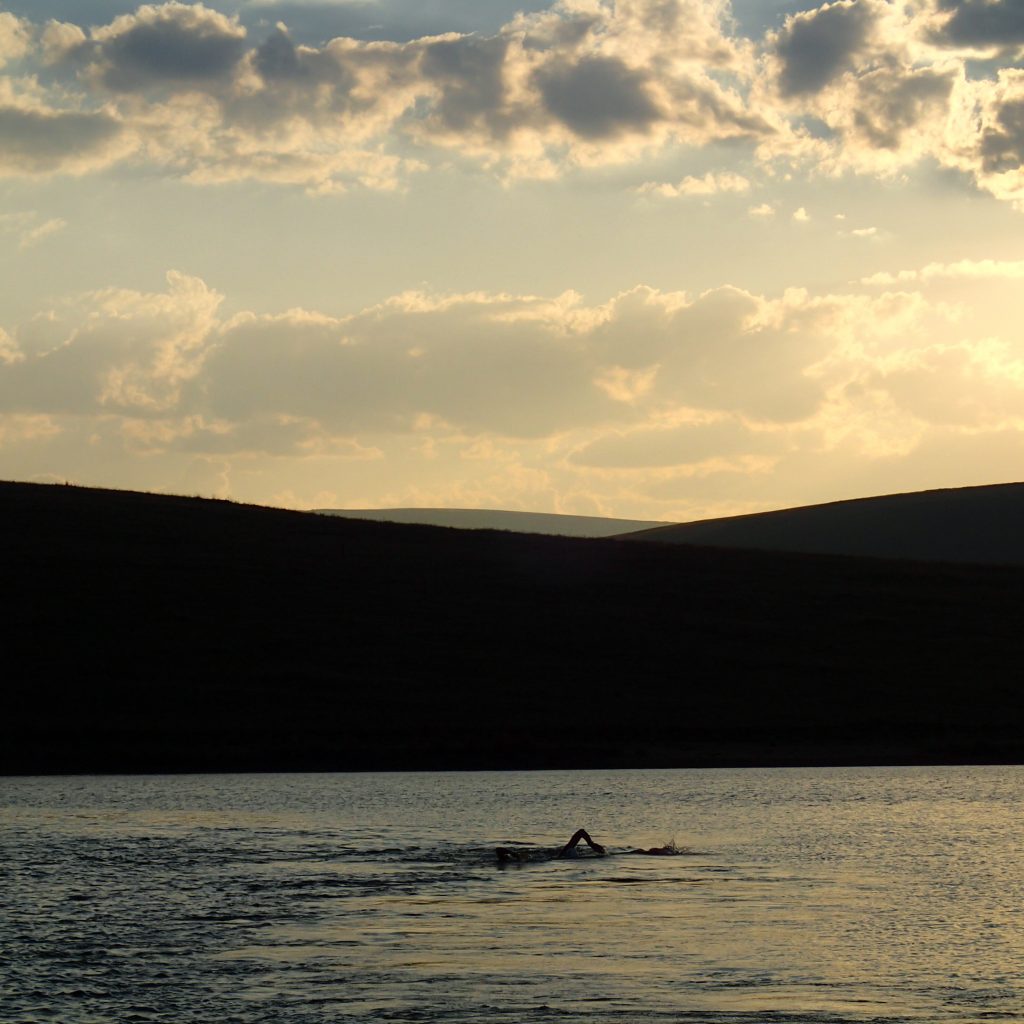 We spent the rest of the day relaxing napping and eating before all connecting for a braai in the evening. It was really great to get to know the Joburg crew a bit better and swap stories about our open water swimming experiences.

Coach Sarah ended up entertaining a few with our Hawaii crossing story and it bought a flood of memories back as well as a stark reminder of how tough that whole process was for me. It is weird for me how it has taken almost 18 months to realise the full extent of that swim and the impact it has had on me and others as a result.

Going forward, it is hard to regroup and train to that level again going into something completely unknown again with probably worse conditions does feel incredibly daunting and overwhelming, but the driving force besides my faith is that I am swimming to create awareness against single use plastic and these are the extents I am prepared to go to tell the world about this growing global crisis.

Day 3
We had a later start with the intention of having the sun on our backs. Thankfully the weather was in our favour. We left the jetty by boat just after 7am to launch in a more sheltered part of the dam with the plan to have the wind behind us most of the way. The front group (myself, Annelize, Marcelle and Nadia (From Joburg) hugged the coast going out the island inlets whilst the back group swam straight across. The kayak stuck with us while the boat monitored the rest of the swimmers.

Today was a much better day with the water being 17 degrees for the first half and then picking up to almost 28 for the second half. It was incredible having the sun on our backs and I was much happier as a result. We swam over rocks, ferns, fish, trees and I even picked up a fish scale! I loved todays swim and was a lot more comfortable. I was cold but not to the point of hating the swim and fighting it. I even started to enjoy the cold feeling after a while and managed to get a good rhythm going a few times.

There was one point near the beginning where I felt sandwiched between the swimmers and ducked under Annelize so I could be on her outside. This made her very confused as suddenly I was not on her left and we both burst out laughing when she realised where I was! I really enjoyed the swim today and spotting fish was of great excitement to me and Annelize! The Joburg girls thought we were nuts diving down to check out the fishes!

I was so proud of Annelize for surpassing her own personal record of 7.4km (on day 2) to get to 10km after a tough weekend of swimming.

We met up with the rest of the swimmers at about 6km and it was fun little interlude before we commenced.
The goal was 9km and when we reached it Nadia decided that we may as well push to 10km so Annelize, myself and her swam an extra km in the now choppy water to reach the iconic 10km milestone. I was so proud of Annelize for surpassing her own personal record of 7.4km (on day 2) to get to 10km after a tough weekend of swimming. Not only did we have to contest the colder water, but the wind chop, lack of salinity and altitude all made for a really tough weekend of swimming. Great training for me and I think everyone came away reaching their own goals and learning so much. 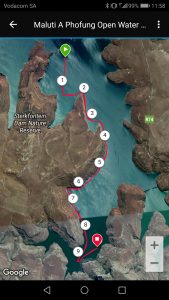 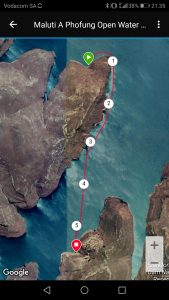 A massive thanks to Sue from Swimfast for putting this weekend together despite hesitating due to numbers. It was a huge learning curve for me in my own swimming. Another big thanks to Caron and Coach Sarah for supporting on the kayak, you guys are amazing and I value you both massively. To Annelize, it was a privilege to share this with you and all the training beforehand has helped me immensely in me maintaining my base fitness. I am super stoked for what you have achieved. To all the other swimmers, it was wonderful to meet you and I wish you all the very best in your training and future swim quests!